Who Cares Loses? Thoughts on the Care UK strike and missed opportunities

Posted on November 14, 2014 by nothingiseverlost 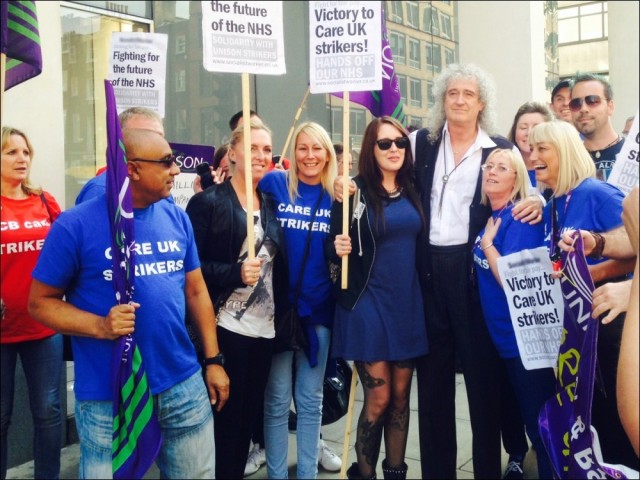 Don’t stop them now: Brian May showing his support for the strikers

So, with Unison recommending the workers should accept the offer of a 2% pay rise – that is to say, a wage cut of 33% rather than 35% – it looks like the Care UK strike may be drawing to a close, although voting doesn’t end until December 1. It’s been one of the longest-running strikes in the history of the NHS, and it’s an exceptionally hard-fought dispute in the context of contemporary UK trade unionism, and now it may be over. I’m not a care worker, and I don’t live in Doncaster: if either of these things were true, I’m sure I’d be a lot more qualified to offer an indepth analysis of the dispute. Still, on the grounds that some analysis is better than none, here’s a few thoughts:

So far, the Socialist Party and Socialist Workers’ Party have been heavily involved in supporting the strike, while very little visible activity has been organised by anarchists, or other supporters of a rank-and-file strategy. While some differences exist between the SP and SWP, their attitude towards the trade unions is fairly similar: throughout the dispute, their main strategy was to call for Unison and the rest of the union movement to deliver action on a national level to back the strikers. Predictably, this didn’t happen. I’m sure that the Trot supporters of the dispute have done a lot of good work, and that they’ve had some influence in some of the more positive aspects of the strike, like the links that were made with Ritzy cinema strikers in London, but ultimately, they’re not willing to argue for a strategy that goes beyond simple trade unionism: they’ll call on the unions to deliver more and better action, but when the unions don’t deliver, or try to end a strike by selling a defeat as a victory, the only alternative they have to offer is that things would be better if they were in charge. 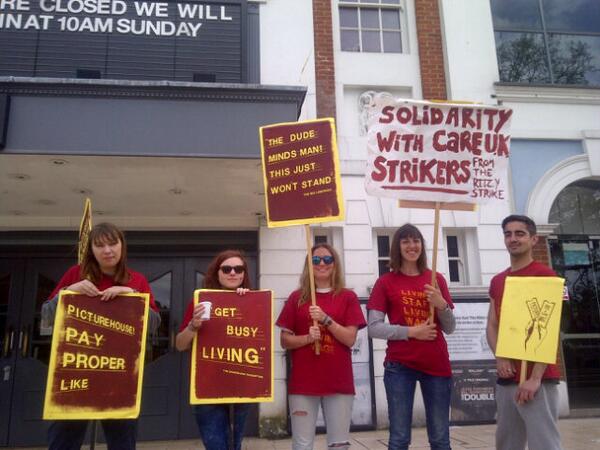 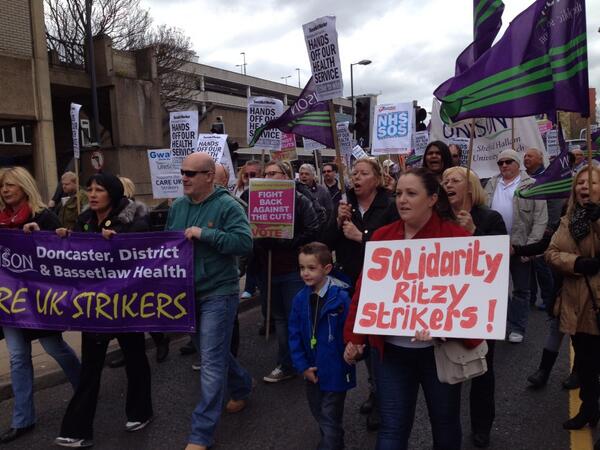 In part, the fact that the SP and SWP were able to play some role in this dispute, while other tendencies couldn’t, reflects the fact that both organisations have a presence in Doncaster, while most other groups don’t. But this explanation only goes so far: in an article for Freedom earlier this year, I tried to set out some suggestions for actions that could be taken to support the dispute across the country. There’s not much point in a fantasy football/armchair general approach to class struggle, but in retrospect I still think that all those suggestions were worthwhile, and the possibility of setting up meetings where Care UK strikers could have addressed other care workers directly would have been especially important. Since there’s no point looking to the official union bodies to spread the struggle, the most important thing that could have happened to change the situation would have been if other groups of care workers had taken the initiative, as happened with Gwalia staff in Wales and carers in Barnet, North London. A serious rank-and-file strategy for escalating the dispute would have had to focus on building direct links between these groups of workers, and spreading news of the action to other care workers in the hopes that the confidence, determination and organisation of the Doncaster strikers might prove infectious.

Systematic, committed solidarity work would also have helped strengthen connections with the striking workers and open up the space for political conversations – charging in with an abstract, one-size-fits-all denunciation of the unions and an arrogant attitude of “here is the truth, bow down before us” would achieve nothing, but at the same time, our understanding of the way the unions behave is something that’s been developed through many long and painful struggles, and our knowledge of lessons gained from these past struggles is worth nothing unless we attempt to communicate it to other workers when it might potentially make a difference. The organiser model developed by the IWW stresses the importance of “inoculation” – preparing the people we want to organise with for how the other side might react – and sometimes inoculating other workers against what the union might do (like recommend acceptance of a bad offer) is every bit as much as preparing for the bosses’ retaliation.

In the end, it seems like the Care UK strike may well end with the acceptance of a disappointing, inadequate offer, and anarchists (and syndicalists, left communists, autonomists, etc) played very little role in the dispute. If we had been more active, it’s likely things would have gone pretty much the same way, as the determination and morale of the workers affected, and other care workers across the country, were the most important factors in this dispute, and interventions by small groups of politicos usually don’t affect these things that much one way or another. Still, there are some things we could have done that might potentially have had some kind of an impact, so it’s worth reflecting on those for next time a similar dispute arises, or if it turns out that they’ll reject the offer.

For now, until we hear anything further, there’s not much to do but to celebrate the strength and determination shown by these workers. The offer Unison are recommending they should accept isn’t much, but it’s more than they would have got if they hadn’t fought. And their bravery in taking such an extended strike is an inspiration to us all. On that note, I’ll end with the words of one of the strikers explaining why she’ll be voting to carry on fighting: “A 2% rise doesn’t come close to making up for the 35% they’ve already taken. Although we’re pleased about the impact we’ve had around the country and extremely proud of the influence we’ve had on other disputes, somehow this offer doesn’t feel like much of a victory”.

"The impulse to fight against work and management is immediately collective. As we fight against the conditions of our own lives, we see that other people are doing the same. To get anywhere we have to fight side by side. We begin to break down the divisions between us and prejudices, hierarchies, and nationalisms begin to be undermined. As we build trust and solidarity, we grow more daring and combative. More becomes possible. We get more organized, more confident, more disruptive and more powerful."
View all posts by nothingiseverlost →
This entry was posted in Strikes, The left and tagged Care UK, Care UK strike, care work, Doncaster, support work, Unison. Bookmark the permalink.

5 Responses to Who Cares Loses? Thoughts on the Care UK strike and missed opportunities