Enjoy hipsterphobia as part of a balanced diet

Posted on October 3, 2015 by nothingiseverlost

As the somewhat improbable level of fallout from the Fuck Parade rolls on, Cava Sundays has offered a more radical critique than the standard “what kind of a monster targets small businesses?” platitudes. I don’t think that their critique of hipsterphobia is wrong as such, but I do think it’s somewhat beside the point, and not particularly helpful when offered at this particular moment in time*.

To recap: the media backlash against Class War has been on two main fronts, with the right-wing press taking up highly personalised attacks against Lisa MacKenzie, while the left liberal media has offered a patronising stance of “it’s all well and good to protest against gentrification BUT NOT LIKE THAT”, followed by explanations of how gentrification is in fact caused by the big capital invested in the property industry and not by small cafes, however wanky they may be. And, of course, underlying all this, is a shared distortion of the facts that turns an anti-gentrification protest that happened to stop off at a hipster café for a bit of high-intensity piss-taking into a an anti-hipster café protest. 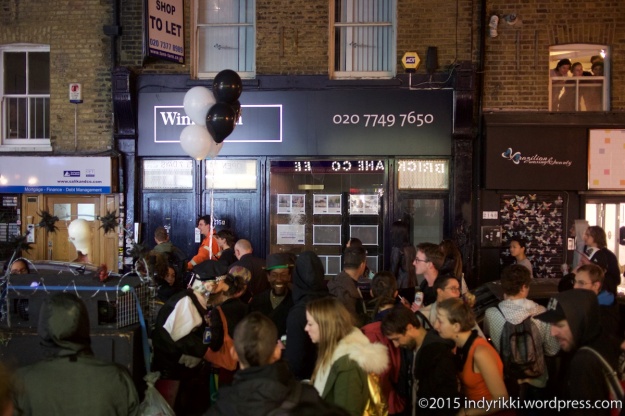 Look at these fucking hipsterphobes having a go at this poor hipster estate agency just because it’s got a beard and rides a fixie.

At a time when CW are at the receiving end of such a high level of media criticism, I don’t think it’s necessarily wrong for radicals to criticise them – criticism is always legitimate and necessary, and adopting a “with us or against us” attitude is dangerous – but I do think it’s important to frame our criticisms in such a way they avoid playing into the media’s campaign**. At a time when the Guardian’s berating CW for thinking that gentrification is caused by hipster cafes and not the property industry, it seems more useful to re-state the actual facts – that the call for the Fuck Parade explicitly discussed the role of international finance capital in re-shaping London***, and that the demonstration itself actually targeted at least two estate agencies on the day – instead of offering a very similar argument, but couched in more ultra-left terms.

If Class War stand accused of hipsterphobia, then Cava Sundays is in danger of veering into hipsterphobephobia – that is to say, reinforcing the media’s attempt to summon into being a subject so simple-minded as to view gentrification as just being reducible to aesthetics. If such a subject exists, it certainly doesn’t seem to have been on display at the Fuck Parade, an event which – and I know I’m repeating myself here, but it really does seem to be worth restating – explicitly criticised the role of big capital in causing gentrification and smashed the windows of at least two estate agencies. Indeed, if I was really in the mood for trying to coin new terms, I might suggest “cerealsplaining” for the act of explaining to a group of people who’ve just smashed the windows of an estate agency that really they ought to be angry at the property industry.

In some ways, the dispute between the supposed hipsterphobes and the “it’s the economy, stupid” approach to gentrification is just a restatement of the well-worn disagreement about viewing class as being an economic relationship (do you sell your labour power to survive, do you have the power to hire and fire) or a cultural status (what accent you have, what your education was like, what your favourite cheese is). In both cases, what’s needed is not reductionism one way or the other, but an approach that’s sensitive to the way economics interacts with culture, whether that’s feeding off cultural distinctions among different groups of wage workers or promoting a certain set of aesthetics (and yes, that can include cereal cafes) as a way of raising the perceived economic value of properties in an area.

To get a grasp of what this interplay between economics and culture can look like, it’s worth leaving the beardy cereal twins alone for a bit and thinking of a different, but related subject: art. There’s a fair bit of writing on the subject of art and gentrification: the subject’s been addressed as far back as 1987 in this article about New York’s Lower East Side, this indepth look from Southwark Notes is very good on the role played by art in that area, and this plea for an uncreative city from Rotterdam is interesting. There’s also a fascinating in-depth essay about these subjects from comrades in Hamilton, Canada, that’s well worth reading to get a fuller understanding of these issues. But perhaps the most concise summary is this article from Oakland about the Rock Paper Scissors art collective. Rock Paper Scissors is under threat of being evicted due to the area it’s in becoming unaffordable. However, as the collective themselves admit, they’ve also played a role in gentrifying the area they can no longer afford to stay in****:

“This space has become attractive to wealthier tenants BECAUSE of the years of hard work we have put in to building a community of engaged artists, musicians, and performers, and as a reward we are being kicked out to make way for a wealthier class of renters.”

The Rock Paper Scissors collective aren’t the same thing as the big corporate players fuelling the property boom in Oakland, but they did play a role for them by helping to make the area more attractive for higher-income residents, and more businesses catering for those incoming residents. The reason why I can afford to pay my rent this year, and am reasonably confident I’ll still be able to pay it next year, is because the Northern city I live in is not perceived as “desirable” or “up-and-coming” enough to fuel a property bubble. Things that change the way an area is perceived, whether they’re public art or quirky small business, can affect how likely capital is to invest in property in that area. Economics is not wholly separate from culture and aesthetics.

There’s something about the graphic design poster in the background of this image that sticks with me.

In this light, we can see the targeting of businesses and developments that help promote a certain image for an area as being comparable to, for instance, defacing political party billboards ahead of an election. It’s not going to defeat those parties, but it’s also not completely pointless as a moment within a broader struggle against those parties. And, of course, something like the Fuck Parade can only ever serve as a spectacular image of the anti-gentrification struggle: the real work has to take place on the estates and in the council housing offices, and without that base, the Fuck Parade could smash the windows of every property speculator in London and all it could really mean would be a stressful day for some insurance companies and a very profitable day for some glaziers.

Hipster cafes, art spaces, and the like are not the motors powering gentrification. But they are part of those processes, they play a role that’s useful for the developers. A concerted struggle against gentrification can’t be limited to them, but it might well be useful to target them as a particular tactic within a larger struggle. A part of something is not the whole of something , but the part is not entirely separate from the whole either.

*This is really just a response to part 1 of the 3-part series – I’m sure parts 2 and 3 will make valid points and be worth thinking about in their own right.

** for instance, if anyone really wanted to serve up valid criticisms of CW, a good place to start would be their brand-building attitude – the way they’ve been happy to keep publicity focused on them rather than trying to use it to raise awareness of other groups like the Sweets Way occupiers.

*** indeed, one of the many curious things about the media coverage of this event is the way that CW have been simultaneously cast as EDL/Britain First-esque “national socialists” for the way in which they’ve personified “foreign” finance capital, and as cereal-hating simpletons too thick to grasp that the real problem is in fact big capital and not small cafes.

**** along similar lines, it’s perfectly possible to imagine a potential future – maybe ten years down the line, maybe more, maybe less – where the beardy cereal twins might want to join forces with Class War to resist new waves of incoming residents and businesses raising property values to a level that would drive them and their customers out. Gentrification is always relative, and stranger things have happened.

"The impulse to fight against work and management is immediately collective. As we fight against the conditions of our own lives, we see that other people are doing the same. To get anywhere we have to fight side by side. We begin to break down the divisions between us and prejudices, hierarchies, and nationalisms begin to be undermined. As we build trust and solidarity, we grow more daring and combative. More becomes possible. We get more organized, more confident, more disruptive and more powerful."
View all posts by nothingiseverlost →
This entry was posted in Activism, Anarchists, Bit more thinky, Debate, Housing and tagged Cava Sundays, cereal cafe, Class War, Fuck Parade. Bookmark the permalink.

2 Responses to Enjoy hipsterphobia as part of a balanced diet