Resisting ISIS is not a crime: stand with Shilan!

Posted on November 16, 2015 by nothingiseverlost

In the wake of the horrific massacres in Paris and Beirut, hopefully we can all agree that wanting to resist ISIS should not be criminalised. Sadly, the Crown Prosecution Service doesn’t seem to see it that way, and so, as people across the world continue to mourn the attacks, Shilan Ozcelik is due in court on Tuesday morning to face charges that she allegedly tried to join the Kurdish resistance fighting against ISIS. If you can make it down to the Old Bailey to support her, or if you know anyone who might be able to, please pass the information on. If you don’t, you can still support her by sending a message via her solicitors at:

Bear in mind that support for the PKK is considered criminal, so please don’t say anything that could get you or her into more trouble.

Fuck ISIS. Fuck the jailers who’ve kept Shilan kept locked up for months awaiting trial, and the judges who denied her request for bail, all because she was alleged to have tried to join the fight against ISIS. 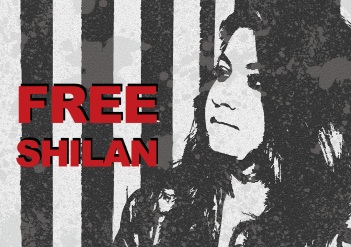 "The impulse to fight against work and management is immediately collective. As we fight against the conditions of our own lives, we see that other people are doing the same. To get anywhere we have to fight side by side. We begin to break down the divisions between us and prejudices, hierarchies, and nationalisms begin to be undermined. As we build trust and solidarity, we grow more daring and combative. More becomes possible. We get more organized, more confident, more disruptive and more powerful."
View all posts by nothingiseverlost →
This entry was posted in Repression and tagged ISIS, Kurdish, PKK, Shilan Oscelik, Shilan Ozcelik. Bookmark the permalink.

3 Responses to Resisting ISIS is not a crime: stand with Shilan!