Posted on December 26, 2015 by nothingiseverlost

It’s been a while, but I’ve finally got around to catching up with the news and events I’ve been meaning to share over the last month or two.

In repression news, Shilan Ozcelik is still inside after having been convicted of wanting to fight against ISIS. She was given a relatively short sentence in the end, after having already been held in prison awaiting trial for months and months, but it’d still be worth writing to her via her solicitor to show solidarity. In similar news, it’s worth keeping an eye on the case of Joe Robinson, who seems to have been questioned by anti-terror police on his return to the UK after having fought with the Kurdish resistance in Syria.

Meanwhile, Peter Simpson is still detained awaiting trial for charges related to a Cardiff Mayday demo, and four comrades are being held in an Italian prison after it apparently kicked off at the Milanese May Day as well, while another four are awaiting extradition from Greece to Italy over the same charges. Continuing the international round-up of nickings and jailings, Josh Williams was sent down for his part in the Ferguson revolt, the Spanish cops are continuing their anti-anarchist operations, and China’s currently in the middle of an aggressive crackdown against activists involved in worker solidarity – see the Solidarity with Chinese Workers section on libcom or Free Chinese Labour Activists Now on facebook for more information.

The saga of state harassment of Scottish Unemployed Workers’ Network activist Tony Cox goes on – he was found guilty of failing to give his name and address to the cops, but the charge of threatening behaviour was dropped. Following on from this, he was arrested once again, held for 27 hours, and bailed with conditions preventing him from entering the Dundee ESA assessment centre ahead of a further court date in February. In the face of all this, it’s good to see that the SUWN aren’t backing down, and hit back by occupying the offices of workfare profiteers Learn Direct. In more straightforwardly pleasing news from the courts, the Daily Mail was left frothing with rage after three people who were nicked for not giving their names and addresses to the cops had their charges dropped, although the article’s so shittily written it’s not even really possible to tell if they were nicked on the National Campaign Against Fees and Cuts demo on November 4th or the Anonymous Million Mask March demo on the 5th. Either way, fair play to them. Similarly, over in France two No Borders activists have been acquitted of inciting riots in Calais. 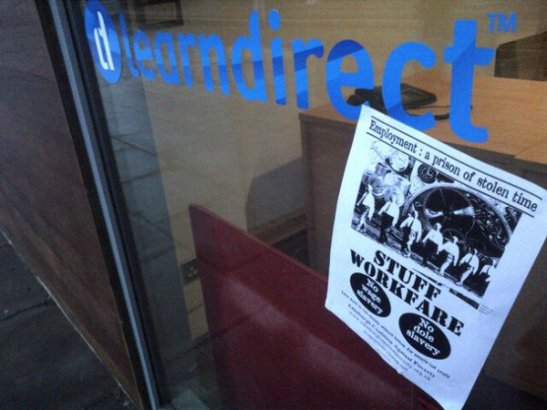 Staying on the topic of state repression, in late November the Met was finally forced to issue a public apology to the eight women who were tricked into relationships with undercover coppers, and this week it was announced that scumbag spycop Bob Lambert has resigned from both his academic jobs. As the Pitchford inquiry into undercover policing goes on, more and more continues to be revealed about this murky subject. Meanwhile, the Scottish government have pledged to stop giving contracts to firms involved in the blacklisting scandal, but rank-and-file construction workers have pointed out that the small print renders the whole thing pretty much meaningless.

On Christmas Day, hundreds of migrants blocked the A16 in Calais and attempted to storm the Eurotunnel – it’s hard to find full write-ups of the event, but there’s one here. A recent article from Calais Migrant Solidarity has highlighted how resistance is happening every day there, and Calais certainly isn’t the only place where people are fighting the border regime – there was a riot at Ponte Galeria detention centre outside Rome this month, collective action stopped a mass deportation of Nigerian women from Yarl’s Wood in late November, hundreds of migrants held in US detention centres have been going on hunger strike, and inmates also rioted at an Australian detention centre in November. Resistance is as global as the border regime. If you’d like to do something to contribute, you could give a few quid to these folk who’re working to keep entrance routes to Europe in the Balkans open, and/or join the Anti-Fascist Network in opposing the upcoming National Front demo against refugees in Dover at the end of January.

The fight for affordable housing in London is still going on – special mention goes to the always-inspiring Focus E15 campaign, who’ve kept campaigning despite the police stealing their table, while groups like Housing Action Southwark & Lambeth are continuing to resist evictions and disrupt sales events held by the property companies fuelling gentrification. Also in London housing news, the Sweets Way defenders appeared in court and got a conditional discharge.

A particularly interesting development has been the rent strike at UCL, which successfully won concessions worth around £500,000 from university management – see here for more analysis of the victory. Hopefully non-student tenants will be able to start adopting the tactic soon – it’s worth noting that residents of San Francisco’s Midtown have been able to keep a rent strike going for over five months now.

Coming up, the next big step is going to be the fight against the Housing and Planning Bill, so if you can make it, join the various housing groups who’ll be demonstrating against the bill on January 5th.

In other news, it’s notable that the government has quietly backed down on two really vile policies recently – Johnny Void and Boycott Workfare have both covered the scrapping of Mandatory Work Activity and the shambles that was the Community Work Programme, but I’ve seen less coverage of the fact that they’ve also abandoned the criminal courts charge, a horribly shit policy that barely lasted six months, and which I covered as part of Plan C’s Demanding the Future project back in April.

Finally, news from a few other groups fighting the good fight: the Mental Health Resistance Network have been out at Thamesreach’s “Employment Academy” in Camberwell challenging their attempts to blur the lines between mental health care and punitive benefit sanctions, and rank-and-file workers and radical union are always continuing to fight back on a grassroots level – from the postie in Fife who’ve walked out in support of a sacked colleague, and the hotel workers organising at places like the ME hotel in Aldwych, to groups like the United Voices of the World union who’ve been driving up wages for cleaners, or Brighton SolFed who’ve been forcing robbing estate agents to pay up (see here for more on that story) and beating employers who try to get away with wage theft. And, last of all, a quick reminder that Plan C’s fundraiser for reconstruction and medical aid to Kobane is still open for donations – if you’ve got any cash to spare, you could try and help them get past the £5,000 mark.

I’ll try and come up with a proper review of the year soon, but in the meantime, I’d like to wish that all readers of this blog have a good holiday if you’re off work at the moment, and you have my sympathies if you’re having to work at the moment. Either way, I hope the new year is a good one for all of us.

"The impulse to fight against work and management is immediately collective. As we fight against the conditions of our own lives, we see that other people are doing the same. To get anywhere we have to fight side by side. We begin to break down the divisions between us and prejudices, hierarchies, and nationalisms begin to be undermined. As we build trust and solidarity, we grow more daring and combative. More becomes possible. We get more organized, more confident, more disruptive and more powerful."
View all posts by nothingiseverlost →
This entry was posted in Anarchists, Housing, Occupations, Protests, Racism, Repression, Riots, Stuff that I think is pretty awesome, Unemployment/claimants and welfare, Unions, Work and tagged Anti-Fascist Network, Calais Migrant Solidarity, Focus E15, Housing Action Southwark & Lambeth, Josh Williams, Mental Health Resistance Network, Pete Simpson, Plan C, Police Spies Out of Lives, Scottish Unemployed Workers Network, Shilan Ozcelik, Solidarity Federation, Tony Cox, United Voices of the World, workfare. Bookmark the permalink.