Posted on March 21, 2016 by nothingiseverlost

Even as someone who tries my hardest to keep my attention focused on grassroots organising and pay as little attention as possible to the games politicians pay, it’s been pretty amazing to watch the chaos among the tories over the last few days ever since the unexpected resignation of Iain Duncan-Smith. As usual with these things, Johnny Void’s summing-up says pretty much all that needs to be said, but it is worth noting one thing: even if it’s impossible to take IDS’s stated reasons for quitting at face value, the fact that he thought it was a useful lie to tell is revealing.

After all, no-one tells lies that will make them unpopular. Generally speaking, people tend to tell lies that they think will make people like them. That means that, by claiming to champion the rights of disabled people, IDS was, in a way, admitting defeat. It shows that, after all this time, after all that propaganda, the project he pursued – gaining popular acceptance for the idea that people who claim benefits are subhumans who deserve any humiliation that can be heaped upon them – still never quite triumphed. The fact that Duncan-Smith ended up claiming to believe something that entirely contradicted pretty much every action he’s ever taken is, in its way, a victory for all those who’ve challenged the austerity narrative – most of all for people like Disabled People Against Cuts and the Black Triangle Campaign, but also for the likes of Boycott Workfare, and in general just everyone who, in one way or another, has done what they can to challenge the legitimacy of benefit cuts.

Meanwhile, far from Parliament and the media, claimants in Edinburgh won another victory: a much quieter one, but one that will make a real difference to people’s lives, as the DWP and G4S security at High Riggs jobcentre backed down on their previous attempts to stop jobseekers from having the right to be accompanied at interviews. As Edinburgh Coalition Against Poverty report, “the DWP interviewer’s attitude was positively transformed from the usual bullying and harassment to which the claimant has been regularly subjected. “This is totally down to the solidarity shown by all of you,” [welfare rights worker] Bob declared.” The Scottish Unemployed Workers Network also have a write-up of the day. Things like this, or the struggles fought by Housing Action Southwark & Lambeth at the housing office, or Brighton Hospitality Workers’ battles against wage theft, might not get the headlines the way that the antics of politicians do, but, as ECAP stress, when we organise and act together, we can see the power of solidarity, a power that has the potential to sweep the Iain Duncan-Smiths and Stephen Crabbs of this world away for good. 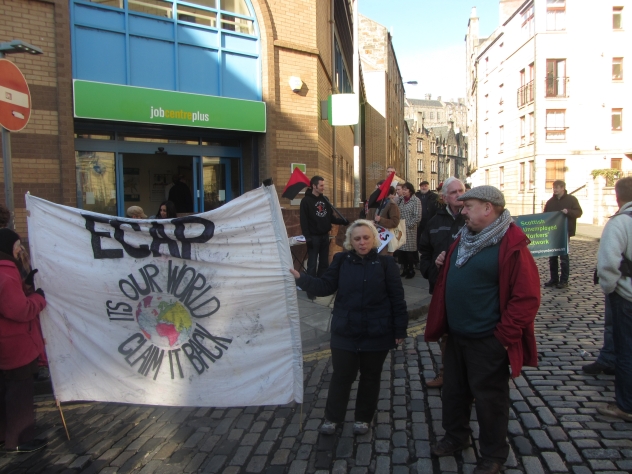 "The impulse to fight against work and management is immediately collective. As we fight against the conditions of our own lives, we see that other people are doing the same. To get anywhere we have to fight side by side. We begin to break down the divisions between us and prejudices, hierarchies, and nationalisms begin to be undermined. As we build trust and solidarity, we grow more daring and combative. More becomes possible. We get more organized, more confident, more disruptive and more powerful."
View all posts by nothingiseverlost →
This entry was posted in Disability, Protests, Stuff that I think is pretty awesome, Tories, Unemployment/claimants and welfare and tagged Edinburgh Coalition Against Poverty, Iain Duncan-Smith, Scottish Unemployed Workers Network. Bookmark the permalink.