“From shambles to farce”: CPS jokers get “a slap in the face”

Back in April, eight people who had blocked the road to prevent people getting into the DSEI arms fair, and defended their actions by saying they were attempting to prevent weapons sold at DSEI from being used in war, torture and genocide, were acquitted of all charges. The Crown Prosecution Service weren’t keen on this result, so they appealed the verdict to try and drag the eight defendants through court again. That appeal has just been refused, in what a defence lawyer called “a slap in the face” for the CPS. 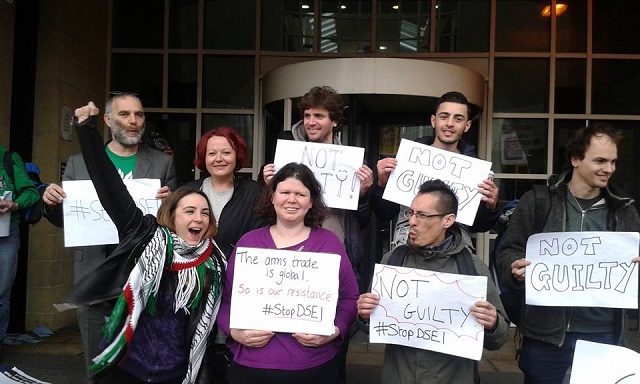 Of course, any victory that rests on the goodwill of a judge is a shaky victory indeed. The reflections published by the Free to Fight collective after the Heathrow 13 verdict are worth revisiting here. In general, it’s always worth bearing in mind that any truly effective struggle for real change will have to use a huge variety of methods and tactics, including some that even the most sympathetic judges will inevitably disapprove of. But still, having said all that, sometimes you have to take your wins where you can find them, and any day the Clown Prosecution Service are frustrated in their efforts to ruin good people’s lives is a pretty decent day in my book.

"The impulse to fight against work and management is immediately collective. As we fight against the conditions of our own lives, we see that other people are doing the same. To get anywhere we have to fight side by side. We begin to break down the divisions between us and prejudices, hierarchies, and nationalisms begin to be undermined. As we build trust and solidarity, we grow more daring and combative. More becomes possible. We get more organized, more confident, more disruptive and more powerful."
View all posts by nothingiseverlost →
This entry was posted in Activism, Protests, Repression, Stuff that I think is pretty awesome and tagged arms trade, DSEi. Bookmark the permalink.

1 Response to “From shambles to farce”: CPS jokers get “a slap in the face”