Know your rights at the jobcentre: you have the right to be accompanied to any interviews

Posted on August 7, 2016 by nothingiseverlost

It’s been a few years now since Edinburgh Claimants/Edinburgh Coalition Against Poverty got the DWP to admit that claimants have the right to be accompanied to all benefits interviews. But, as something that can potentially shift the balance of power, the jobcentre are always reluctant to allow claimants to exercise this right, so it’s worth reminding everyone of it from time to time. Here’s a letter the Welsh IWW got recently apologising after a local jobcentre tried to stop claimants from taking IWW reps with them: 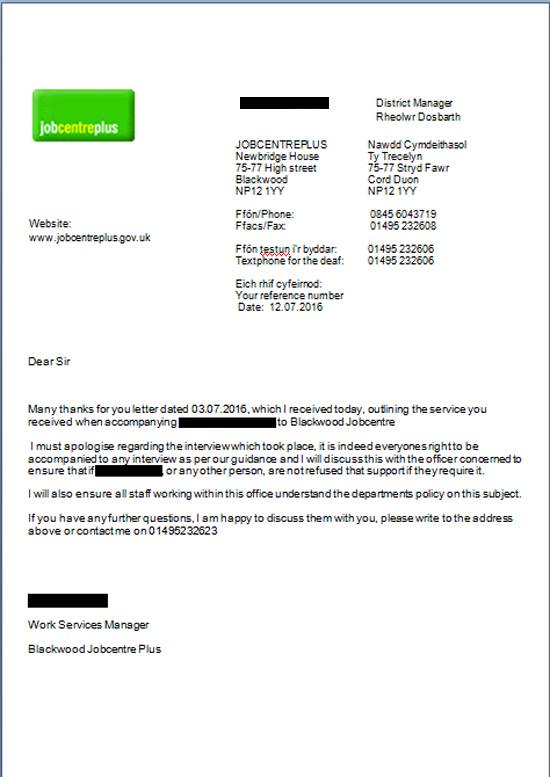 On the same subject, Tony Cox, the man who’s been dragged to court twice for accompanying claimants to interviews, has written a great piece about the activity of the Scottish Unemployed Workers’ Network, one that I can hardly recommend enough. A short taster:

“Thousands of ‘Know Your Rights’ leaflets were distributed at dozens of advice stalls over the freezing winter of 2014-15, and dozens of cases were directly taken up by us. Our method of working was simple; two volunteers would station themselves on each side of the jobcentre entrance in order to ensure that everyone going into the buroo was handed a ‘Know Your Rights’ leaflet, and everyone who was leaving was asked by a third volunteer, who was stationed directly outside the entrance, whether they were experiencing any problems. We also had volunteers leafleting passers-by and manning the advice stall, which was kept supplied with further advice leaflets along with our bible, the Child Poverty Action Group (CPAG) Handbook. At the height of the sanctions regime, we were often dealing with five or six cases a day. This often involved volunteers accompanying unemployed people into the buroo to clarify their situation and to support them in negotiations with their ‘job coaches’ (sic), whilst other volunteers accompanied unemployed people to the welfare rights office to introduce them, and the their cases, to the full-time welfare workers. In this way, more of our volunteers were getting direct hands-on experience of front-line advocacy, learning what the main reasons were for sanctions, and looking for the most effective way these sanctions could be challenged. We never lost sight of the primary need to support the unemployed to represent themselves through making sure they were aware of their rights, and re-instilling in them a confidence to challenge the ‘job coaches’ and ‘decision makers’ by pointing to the support they could count on from ourselves.

We also noticed, as word spread of our activities (not least through jobcentre staff themselves who would often go out of their way to decry us to their ‘clients’ as a ‘political mob’ with no interest in helping people), that increasing numbers of curious fowk started to congregate around our stalls to share news, get advice, bring us stories and cases, and to generally chill out. And we heard from increasing numbers of people that the presence of our stalls was acting as a check on sanctioning activity, and that the jobcentre staff were far more pleasant with them when we were outside and, particularly, inside, the jobcentre. We took our methods and stalls to Govan and to Paisley, though our centre of activity remained Dundee.

By the spring of 2015, we received proof that our methods were working when it was announced by the DWP that there had been no less than a 40% fall in sanction rates in Dundee compared with the previous quarterly figures…

Since the trial and verdict we have continued with front-line advocacy, a method of welfare work that is attracting wider attention from other anti-austerity and welfare-activist groups, including Edinburgh Coalition Against Poverty (ECAP), Castlemilk Against Austerity (CAA) and the London-based Boycott Workfare. We are confident that front-line advocacy is the way forward for the growing anti-austerity movement. It may put activists in the direct line of fire, but, if this movement grows, that will offer much greater protection from harassment and spurious allegations than any class-ridden so-called ‘justice system’ ever could. We should remember that, whilst we have not asked for this battle, the struggle, once joined, can act as an agent of transformation for both old and new activists and for the unemployed themselves – who are often the same people. It can induce confidence in place of isolation, and optimism in place of hopelessness, and it can transform the balance of power in relations between the unemployed and the DWP, and between the governors and the governed. The appetite increases with the eating, and once people have recognised the extent of their power and the limitations of those that oppress them, then the stage is set for radical change.

Whilst we in the SUWN in Dundee have been on a fairly steep learning curve, particularly with regards to the highly politicised policing methods we are faced with, the deepening struggle has also forced us to look outwards, beyond the reaches of the city boundaries, in order to forge links with like-minded activists and groups. We have been stunned and delighted by the solidarity actions organised in defence of our right to advocate by welfare groups across the (dis)United Kingdom. We have made new friends and comrades, who have added to our pool of knowledge and expertise. Taken together, we are not yet a movement, but our developing network of groups and activists contains within itself the promise of future, and potentially spectacular, success and growth. The issue of welfare reform will be with us for some time yet – it presents us with a clear issue for our campaigning and direct action methods, and with a focus for the building of a broad and united anti-austerity fighting front.”

And finally, on the subject of claimants getting organised, we should all take a moment to celebrate the heroic work of Frank Zola and Boycott Workfare, who’ve finally triumphed after a four-and-a-half-year battle to get the DWP to comply with the Freedom of Information act and name the companies that took part in the Mandatory Work Activity scheme. Way back in 2012, the DWP had said that they didn’t want to release this information because “disclosure [of these names] would have been likely to have led to the collapse of the MWA scheme.” They’ve now managed to drag their feet for so long that MWA did indeed collapse in the meantime even without the names being released.

As Boycott Workfare say, “They were worried public opinion would be against workfare exploitation and that those using workfare would be pressurised to pull out. Well they did pull out, they are pulling out, and they will pull out. Let’s make sure the DWP’s worst fears now materialise and public pressure ensures that workfare is consigned to history.

Workfare isn’t over just yet, but this legal judgement along with your active continued support quickens its demise. There is no hiding behind anonymity any more for workfare profiteers, nor any excuse for them to be involved in workfare schemes. It’s a fact, as this campaign shows, that workfare cannot exist without anywhere to send people to. So, together let us continue to shut down workfare.”

"The impulse to fight against work and management is immediately collective. As we fight against the conditions of our own lives, we see that other people are doing the same. To get anywhere we have to fight side by side. We begin to break down the divisions between us and prejudices, hierarchies, and nationalisms begin to be undermined. As we build trust and solidarity, we grow more daring and combative. More becomes possible. We get more organized, more confident, more disruptive and more powerful."
View all posts by nothingiseverlost →
This entry was posted in Know your rights, Unemployment/claimants and welfare and tagged Boycott Workfare, DWP, Edinburgh Coalition Against Poverty, Frank Zola, Industrial Workers of the World, Mandatory Work Activity, Scottish Unemployed Workers Network, workfare. Bookmark the permalink.

3 Responses to Know your rights at the jobcentre: you have the right to be accompanied to any interviews