Posted on October 9, 2016 by nothingiseverlost

Next week sees a few different protests in support of ongoing cleaners’ struggles in the capital.

First up, the RMT’s organised two demonstrations in support of outsourced tube cleaners, who’re already low-paid and are now being affected by staffing cuts, on Thursday 13th: one starting at 10am outside City Hall, then one later in the day at 3pm outside the Interserve headquarters. 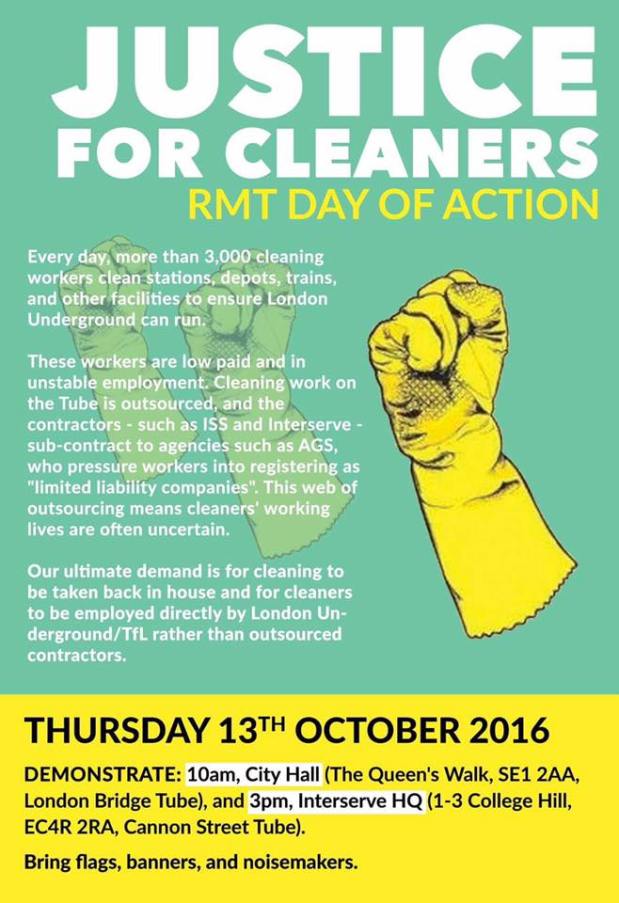 The following day, the UVW union have organised a protest at the LSE starting at 1, demanding the reinstatement of Alba, a long-standing member of the LSE’s cleaning team who’s just been sacked by the cleaning contractor Noonan. You can see a brief clip of Alba asking for support here:

"The impulse to fight against work and management is immediately collective. As we fight against the conditions of our own lives, we see that other people are doing the same. To get anywhere we have to fight side by side. We begin to break down the divisions between us and prejudices, hierarchies, and nationalisms begin to be undermined. As we build trust and solidarity, we grow more daring and combative. More becomes possible. We get more organized, more confident, more disruptive and more powerful."
View all posts by nothingiseverlost →
This entry was posted in Protests, Unions, Work and tagged LSE, RMT, tube, United Voices of the World. Bookmark the permalink.