Posted on August 29, 2017 by nothingiseverlost 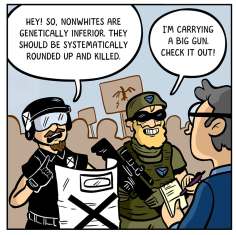 I’m worried about Chris Hedges, and he’s worried about me. Hedges has just published a frothing attack on antifascists, where he seeks to equate us with the far right. Of course, he has to distort the facts to a ludicrous extent to try and make his case – leaving aside the rather important fact that antifascists don’t tend to use the ISIS tactic of driving cars into crowds of people, leaving aside the way that the shooting of Hex, the Quebec City mosque massacre, the murder of Timothy Caughman, the murder of Richard Collins III, the double murder of Ricky John Best and Taliesin Myrddin Namkai Meche and the Florida Atomwaffen’s attempt to build a radioactive bomb all disappear into thin air in Hedges’ narrative, and the astonishing act of victim-blaming whereby the nazi stabbings in Sacramento last year can be recounted as “A march held in Sacramento, Calif., in June 2016 by the neo-Nazi Traditionalist Worker Party to protest attacks at Trump rallies ended with a number of people stabbed. Police accused counterprotesters of initiating the violence”… leaving all that aside, I can’t help notice that there’s something a bit troubling about Hedges’ language.

As I say, I’m troubled by Hedges, and he’s troubled by me. Anarchists and antifascists, especially those of us who seek to avoid being doxed and so take steps to hide our identities, have bothered Hedges for a long time: five years ago, he described us as a “cancer”. He’s clearly still proud of that work, as he links to it in his new piece. Now, he sees us as “the product of a diseased society”, “infected” with a belief in violence, and also “infected with the dark, adrenaline-driven urge for confrontation” (he really likes the word “infected”, for some reason, enough to use it twice in a single piece) and “poison[ing] national discourse”. There seems to be something of a theme here. I can’t help thinking all this medical talk of cancer, disease and infection reminds me of something. Looking through a few scholarly works on the Argentine junta, the Pinochet regime, and other Southern cone dictatorships, we find:

Of course, just because Hedges talks like a murderous colonel doesn’t mean that he actually is one, any more than the passing surface similarities that he manages to dredge up between antifascists and our opponents actually mean anything substantial. I just offer this as a reminder that those who live in glass houses shouldn’t throw horseshoes. And if Chris Hedges is reading this: I would like to assure you that antifascists have no desire to interfere with your precious bodily fluids.

"The impulse to fight against work and management is immediately collective. As we fight against the conditions of our own lives, we see that other people are doing the same. To get anywhere we have to fight side by side. We begin to break down the divisions between us and prejudices, hierarchies, and nationalisms begin to be undermined. As we build trust and solidarity, we grow more daring and combative. More becomes possible. We get more organized, more confident, more disruptive and more powerful."
View all posts by nothingiseverlost →
This entry was posted in Debate, Stuff that I don't think is very useful, The media and tagged antifa, Chris Hedges. Bookmark the permalink.

1 Response to Is Chris Hedges alright?