Friends like these: some thoughts on free speech, alliances, agreeing with people, and guilt by association

Posted on December 3, 2017 by nothingiseverlost 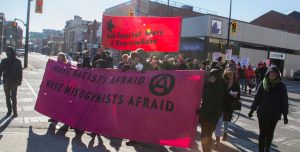 Another week, another round of disagreements over how to respond to transphobia. The latest news is that Peace News have weighed in with their take on the bookfair conflict, while over in Canada frat-boy “we’re definitely not fascist, we just really like fighting anti-fascists” group the Proud Boys had a hilariously unsuccessful attempt to stage a “free speech rally” in support of some teaching assistant who got told off after making the weird decision to show a transphobic video in the middle of a grammar and writing skills class.

The Peace News article takes the hardline “free speech absolutist” position, which I’ve always thought is unworkable, relying as it does on the unstated assumption that anyone who wants to say anything should have unimpeded access to whatever resources they want to use to amplify their voices. Of course, no one actually thinks this, which is why, for instance, Peace News might talk about how they think free speech is good, but they’re not likely to start accepting promotional content from BAE Systems, or editorials from Hilary Benn about why we should bomb wherever Hilary Benn wants to bomb this week, or from Michael Gove about celebrating the glorious memory of WWI.

In contrast to the hardline free speech position, which presents the act of making a decision about whether or not something is appropriate for a certain space as being a wildly exceptional act requiring exceptional justifications, the truth is that every day people are constantly making decisions to promote some perspectives and to not promote some others – the entire job of an editor, for instance, is to publish some stuff and to decide not to publish some other stuff, or to censor things and suppress free speech if you want to put it in those terms.

While the Birmingham bin strike now appears to be over, and the future of the Durham TAs dispute is very uncertain, if people had held a meeting at the height of either dispute to discuss the way forward, and representatives of the council had asked to address the meeting in order to urge everyone to give up, it would have been perfectly reasonable to refuse that request.

More broadly, any kind of vaguely progressive or pro-working class event happening in such a place while such a dispute’s on should probably avoid inviting councillors on to the stage in order to avoid insulting those affected by their actions. The example that always sticks in my head here is that one anti-EDL rally in Leeds where the SWP/UAF invited a Lib Dem councillor on stage, at a time when Leeds bin workers had been on strike for two months against a vicious pay cut imposed by that same council. To put it mildly, I think it would have been better to not give that councillor an invitation to speak – or to censor him and to suppress his free speech, if you think that’s a helpful way of describing things.

So, if we reject the Peace News position of “everyone has to have total access to all platforms at all times” (and again, I don’t think Peace News really believes that either, because I don’t think they would invite arms dealers to exercise “free speech” in their pages, even as they insist that anarchists should have to allow transphobic leafleting in our bookfairs), in favour of recognising that there’s nothing wrong with insisting on a little basic coherence in how spaces are used, the question is no longer an issue of principle – “it’s wrong to prevent anyone from speaking in any space ever” – and instead becomes a judgement as to whether a certain position is compatible with the space being used to promote it.

At this point, once again, I get stuck on trying to understand why people think the campaign against the Gender Reassignment Act is one that should be given space in anarchist/radical venues. I recognise that discussing the particulars of what does or doesn’t belong at the London Anarchist Bookfair is a bit of a pointless question at this point, especially since it seems unlikely that there’ll be a 2018 event, but it also seems likely that these people will attempt to hijack other events to promote their campaign. To me, it seems incomprehensible that people would demand that anarchist spaces be used to promote a movement which is very clearly part of a coalition with the right-wing of the Conservative Party, and I don’t really understand whether it’s because people think that the terfs aren’t really mates with the conservative right, or whether it’s because they think carrying out joint political work with the conservative right is fine and dandy and totally compatible with anarchism.

At this point, I want to stop and consider a possible objection to what I’m saying. It’s very easy to end up “on the same side of the argument” as someone – one very obvious example would be the EU referendum, where a lot of people supported Leave and so were “on the same side” as Boris Johnson and Tommy Mair, or else supported Remain and so were “on the same side” as David Cameron, the CBI and the European Central Bank. Similarly, at a time when most neoliberal centrist politicians at least pay lip service to the idea of equal rights for LGBTQ people, those of us who are opposed to homophobia and transphobia can be said to be “on the same side” of the argument as the neoliberal center. I don’t think that guilt-by-association reasoning is helpful to use in any of those cases, so I can see why people would be reluctant to do the same with anti-trans feminists and the anti-trans right. Here’s a quick review of why the conservative/radfem united front against trans people is qualitatively different to those other cases:

In the EU referendum, both the left leave and left remain campaigns, for all their flaws, were organisationally independent from their right-wing counterparts. I’m not aware of Nigel Farage ever citing Bob Crow, or trying to work with TUSC, and if he did I’m sure they would have made it clear that he wasn’t welcome. Similarly, we can’t equate all opposition to homophobia and transphobia with the neoliberal centre, because there’s a long tradition of radical queer and trans activism that’s actively opposed to state co-option, such as the clash between cops and the Police out of Pride protesters at Glasgow Pride this year, or the disruption of a Trans Day of Remembrance event which featured the chief of the DC police.

In contrast to this, the main voices of “gender-critical” anti-trans feminism seem very keen to work with any rightwing scumbags they can find – from Sheila Jeffreys’ admiration of Norman Tebbit, to Judith Green, Miranda Yardley and Stephanie Davies-Arai speaking at David Davies’ meeting and thanking him for organising it, to Maria MacLachlan selling pictures to the Mail, to Miranda Yardley giving an interview to Ian Miles Cheong, a troll who probably doesn’t really believe in anything, but is currently getting his money and attention from the anti-feminist 4Chan/gamergate crowd, to Yardley also writing articles for the Sun, to Linda Bellos giving interviews to the Mail. And that’s just the UK, before we even get on to people like Hands Across the Aisle in the US, or Lindsay Shepherd’s newfound friendship with the alt-right Rebel Media in Canada.

And we shouldn’t forget that people from the terf side of the conflict have been giving information to the police regarding the Hyde Park incident – you can’t claim to be opposed to violence and in favour of non-violent conflict resolution if you’re happy to invite active intervention by a group, disprortionately composed of cis men, who routinely carry and use weapons, the people who are linked to a huge string of deaths, the people who killed Edson and Daz and Rash and Yassar Yaqub and just hospitalised Terrell. There’s a reason why there’s an annual event for those killed by police brutality, but no comparable event for people who’ve died after someone called them a terf, or even after someone called them a terf and broke their camera.

Against this fairly sizable wedge of evidence showing direct collaboration between the anti-trans feminists and right-wing tory MPs, the very worst of the right-wing media, and the cops, is there anything at all to suggest the existence of a politically independent terf current that’s not directly tied to the right wing of the establishment? Has anyone in or around the terf camp publicly broken with the likes of Yardley, Bellos and Jeffreys, and sought to directly challenge these tory collaborators the same way the brave comrades in Glasgow and DC have been challenging the cops? And if not, why on earth should we treat them as being anything other than footsoldiers for the more powerful forces that they’ve chosen to align themselves with?

One more contrast, to reiterate the point: earlier this year, campaigners against “Imprisonment for Public Protection” – the cruel and broken scheme that’s turned sentences of a few months into an endless ordeal – found that far-right activist and former EDL leader Tommy Robinson had been speaking to IPP families. Instead of thanking him for his interest in the issue and encouraging him to carry on raising awareness, they issued a statement making it clear that fascists have nothing to offer working class prisoners and their families. Now, this is how Lindsey Shepherd reacted to alt-right journalist and Daily Stormer interviewee Faith Goldy taking an interest in her case. Just to be clear, Goldy is someone who was fired by the Rebel Media – Tommy Robinson’s current employers – for making them look too openly racist with her glowing coverage of Unite the Right in Charlottesville and her appearance on a neo-nazi podcast. Again, going out of my way to be reasonable here, maybe Shepherd just didn’t know who she was replying to… but if that was the case, you’d expect her to issue a correction at some point, and to try and distance herself from her “Western chauvinist” supporters. I’m not holding my breath on that one.

"The impulse to fight against work and management is immediately collective. As we fight against the conditions of our own lives, we see that other people are doing the same. To get anywhere we have to fight side by side. We begin to break down the divisions between us and prejudices, hierarchies, and nationalisms begin to be undermined. As we build trust and solidarity, we grow more daring and combative. More becomes possible. We get more organized, more confident, more disruptive and more powerful."
View all posts by nothingiseverlost →
This entry was posted in Anarchists, Bit more thinky, Gender, The left, The media, The right, Tories and tagged free speech, London anarchist bookfair, terfs, transphobia. Bookmark the permalink.

5 Responses to Friends like these: some thoughts on free speech, alliances, agreeing with people, and guilt by association