Posted on March 25, 2018 by nothingiseverlost

Two pieces of news from the ongoing wave of cleaners’ struggles in London:

At the Daily Mail, cleaners organising through the UVW union have managed to secure a pay rise of around 25% and force management to back down on their threats to fire any striking cleaners: 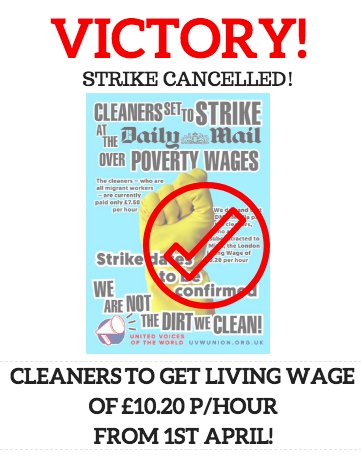 A group of migrant cleaners – who are members of the trade union United Voices of the World (UVW) – have just won a historic victory at the Daily Mail.

After the threat of an all-out cleaners strike at the Mail’s offices in Kensington, and the prospects of large and lively protests and pickets, it is now confirmed that the cleaners’ demands have been met: as of 1st April 2018 they will all receive the London Living Wage of £10.20 per hour.

The cleaners – some of whom have been scrubbing and polishing the Mail’s offices for nearly 20 years and are outsourced to Mitie Group Plc, a FTSE 250 company – were previously paid only the national minimum wage of £7.50 per hour.

In real terms the cleaners have secured a 25% wage increase equating to nearly £500 extra per month per worker, or around £6,000 extra per year.

This victory will therefore lift the cleaners out of the poverty which, up until now, the Mail has cruelly constrained them to languish in.

The cleaners’ bravery in speaking out also captured the public imagination with nearly 100,000 people signing a petition, on Change.org, written by the cleaners under the pseudonym Juliana, in support of their demands.

This was no easy feat for the cleaners, none of whom had been in a trade union before let alone been on strike. Furthermore, on receipt of the declaration of a trade dispute from UVW and notice that the cleaners would be balloted for strike action, the contract manager for Mitie stormed in to the Mail’s offices and unlawfully threatened the cleaners telling them that if they ever went on strike they would immediately be sacked.

The cleaners’ courage to not let such desperate and unlawful threats intimidate them cannot be overstated.

Winning this wage increase is all the more impressive as just last month the Mail forced through £30,000 worth of cuts to the cleaning contract, clearly showing that before the cleaners made their demands the paper had no intention at all of investing a single penny more in their salaries.

The cleaners – all of whom are migrants predominantly from Latin America and Africa – also knew that they were standing up to an organisation that is responsible for churning out all manner of hateful bile about migrants, including the pernicious lie that migrants drive down wages.

Well, now the Daily Mail writers need look no further than their own offices to see that this claim is utterly false. It’s not migrant workers who suppress wages, it’s miserly and unscrupulous employers who take advantage of unorganised workers and keep them on the breadline. Perhaps the millionaire editor of the Daily Mail Paul Dacre will reflect on this before he sits down to sign off on another anti-migrant headline in an office kept clean and tidy by the very people his publication routinely denigrates.

Meanwhile, at the Royal Opera House, where cleaners and porters organised through the grassroots union CAIWU recently won a wage rise, and have since been targetted by a wave of sackings and disciplinaries aimed at union members, nightly protests are set to continue, and a new list of ways to support the dispute has now been published:

HOW YOU CAN HELP THE DISMISSED OPERA HOUSE WORKERS

"The impulse to fight against work and management is immediately collective. As we fight against the conditions of our own lives, we see that other people are doing the same. To get anywhere we have to fight side by side. We begin to break down the divisions between us and prejudices, hierarchies, and nationalisms begin to be undermined. As we build trust and solidarity, we grow more daring and combative. More becomes possible. We get more organized, more confident, more disruptive and more powerful."
View all posts by nothingiseverlost →
This entry was posted in Stuff that I think is pretty awesome, Unions, Work and tagged CAIWU, Royal Opera House, The Daily Mail, United Voices of the World. Bookmark the permalink.