We are all the wrong kind of Jews: solidarity with Jewdas against the fascist collaborators and hypocrites

Posted on April 3, 2018 by nothingiseverlost

I think humanity is finally rejecting what has always been an impossible project, the project of representation. The present proliferation of major and minor pharaohs around the world is the final and ludicrous stage of that impossible project. My life can’t be lived as a representation; my representative can’t realize my aspirations, take my steps or engage in my actions. The pharaohs are the final and definitive proof of the impossibility of representation. I think we’ve all finally learned what took me so long to learn, namely that I’m robbed of my enjoyment if my representative enjoys himself for me, that my hunger remains when he eats for me, that I don’t express myself when he speaks for me, that my mind and my imagination stagnate when he thinks for me and decides for me, that I lose my life when he lives for me. – Fredy Perlman, Letters of Insurgents

You shall not bear false witness against your neighbour – Shemot/Exodus, 20:13

A few things to note about the latest controversy over some Jews observing Passover: first of all, it’s important to note that the source of this story is the despicable “Guido Fawkes” website, run by one Paul Staines. It’s worth taking a moment to review Mr Staines’ history here: he is on record as having written to the BNP organiser in Hull, back in his Federation of Conservative Student [FCS] days, to propose joint “direct action” against leftists. This wasn’t the relatively soft and fluffy BNP of the 2000s, but the much harder and more openly neo-nazi version of the mid-1980s, when it was still under the leadership of long-time nazi John Tyndall. At around the same time he was also engaged in writing jolly little songs, including one with the chorus “gas them all, gas them all… Yes we’re saying goodbye to the Left, as safe in their graveyards they rest. ‘Cos they’ll get no further, we’ll stop with murder, the bootboys of FCS”.

He’s also reminisced about this period of his life as being one where “I never wore a “Hang Mandela” badge but I hung out with people who did“, although to be fair to the man he has now recognised that this was a tactical mis-step – bad optics, as they say nowadays. Elsewhere, he’s boasted about his role in arming right-wing death squads, characterising it as “I was over in Washington, in Jo’burg, in South America. It was ‘let’s get guns for the Contras’, that sort of stuff. I was enjoying it immensely, I got to go with these guys and fire off AK-47s. I always like to go where the action is, and for that period in the Reagan/Thatcher days, it was great fun, it was all expenses paid and I got to see the world.”

Of course, it would be unfair to hold these things against him if they were just youthful indiscretions; but as recently as this decade, he’s been enthusiastically singing the praises of the murderous dictator Pinochet, and boasted “I don’t have any problem with having raised money to kill communists.”

And as for the Guido Fawkes website itself, credit goes to Magpie Ranger for having the stomach to dig up these charming gems (the odd spelling is apparently because Staines’ readership is so full of vehement antisemites that he’s had to put word filters in place to try and slow them down a bit): 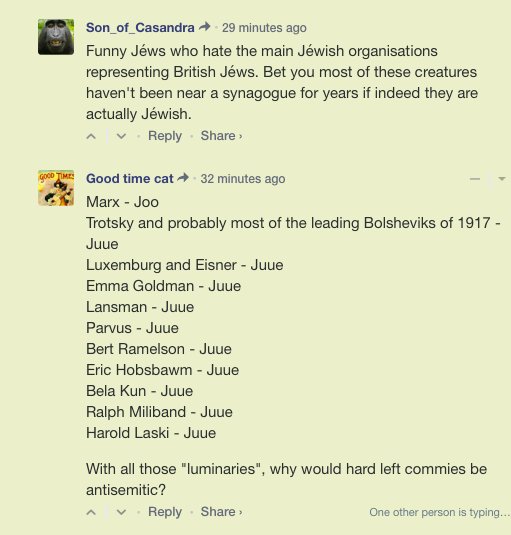 These are the people who’ve set the agenda that large parts of the media and the Labour Party have followed by choosing to promote the idea that it’s somehow scandalous to attend a Passover celebration organised by an anti-racist Jewish group – as opposed to, say, Chris Williamson defending the antisemite Scott Nelson/”Socialist Voice”, or that indefensible open letter about “a very powerful special interest group”, which seem to have been completely overshadowed in all the fuss.

This isn’t about defending Corbyn. It’s about defending the idea that there should be space for Jews who disagree with Jonathan Arkush, and that there’s nothing shameful about being associated with Jews who disagree with Jonathan Arkush. Similarly, it’s not just about the fact that Jewdas are Jews – Gilad Atzmon and Tony Greenstein can also claim Jewish descent, and I wouldn’t defend anyone choosing to seek out their company. What’s important here are that Jewdas are a group of Jews with a long track record of opposing antisemitism on both the left and the right, including in the Palestine solidarity movement.

Their record of campaigning against antisemitism doesn’t automatically make them right about everything – I thought their take on the current controversy, while entirely reasonable in the context of an internal debate within “the Jewish community”, didn’t get the emphasis quite right for an article that was bound to be read by people outside of that particular context – but I’ll take a group of Jews dedicated to opposing antisemitism over the kind of Pinochet fanboy who gets his kicks from being allowed to hang around with death squads or the pathetic gentile schmucks who’re in such a rush to pronounce on which Jews are and aren’t acceptable that they can’t even take the time to learn the words they’re using, any day of the week.

Top marks for nauseating hypocrisy go to the Campaign Against Antisemitism, who in 2015 helped to organise against a neo-nazi march as part of a campaign initiated by Jewdas and publicised in the Jewish News, but who now claim that attending a Jewdas event is “a very clear two fingered salute at mainstream British Jewry”. Presumably when they joined in with Jewdas’ anti-nazi organising back in 2015, they were also giving a clear two-fingered salute to mainstream British Jewry, and Jewish News was doing the same by publishing their article.

But no-one can beat Jonathan Arkush, with his characterisation of Jewdas as “a source of virulent antisemitism”, for hyperbole. In the past, I’ve warned against the danger of a kind of semantic dilution rendering the term “antisemitism” meaningless*, which would be an extremely worrying development. Antisemitism is a real problem, and antisemites do really exist, and they should be fought against vigorously – but if that’s going to happen, we need some sort of minimal clarity about what the word means. There is nothing that would please antisemites more than for the word to lose all meaning, so that the taboo against it is erased and it evokes nothing more than a cynical shrug or an eyeroll instead of revulsion; and by trying to make the term “antisemitism” so elastic that there is literally no difference between a group of Jews who campaign against antisemitism – and are given space in completely mainstream Jewish publications to do so – and “a source of virulent antisemitism”, Jonathan Arkush is taking us a significant step down that road. Of course, that doesn’t make him “a source of virulent antisemitism” himself, but it does make him a thoroughly nasty and dishonest bastard.

* in one of those nice little ironies of history, I was criticising a letter that Jewdas had cosigned.

"The impulse to fight against work and management is immediately collective. As we fight against the conditions of our own lives, we see that other people are doing the same. To get anywhere we have to fight side by side. We begin to break down the divisions between us and prejudices, hierarchies, and nationalisms begin to be undermined. As we build trust and solidarity, we grow more daring and combative. More becomes possible. We get more organized, more confident, more disruptive and more powerful."
View all posts by nothingiseverlost →
This entry was posted in Labour, Racism, The media, The right and tagged antisemitism, Jewdas. Bookmark the permalink.

7 Responses to We are all the wrong kind of Jews: solidarity with Jewdas against the fascist collaborators and hypocrites