Posted on June 24, 2018 by nothingiseverlost 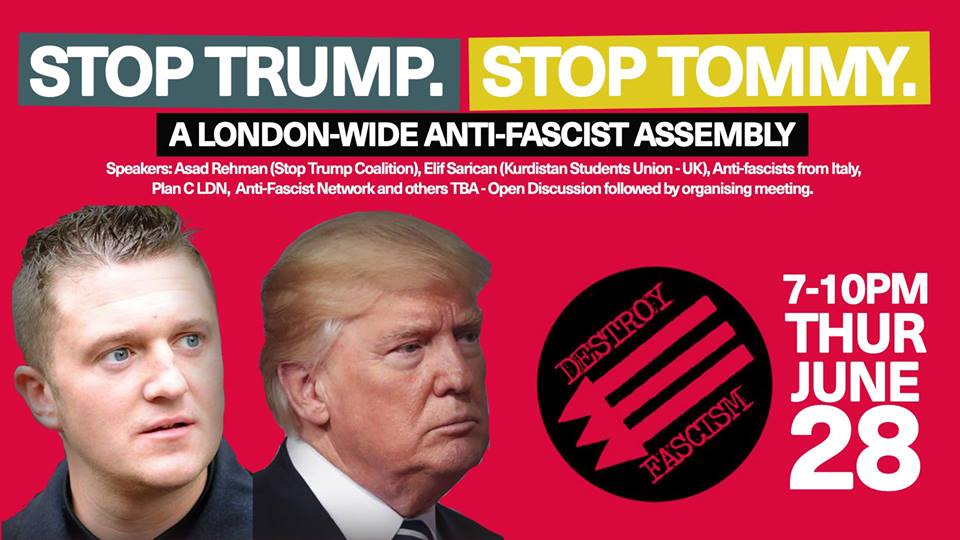 As anti-fascist commentators like When Rome Burns have noted, the far-right have seen a worrying boost as a result of the “Free Tommy” mobilisations. The next few weeks will see a number of important dates for anti-fascists. There will be public organising meetings on responding to this threat in Brighton on Tuesday 26th June and in London on Thursday 28th. After that, the next big date is in Leeds on Saturday 7th July, when Leeds anti-fascists are asking people to join them in opposing a “Free Tommy” march through the city. Liverpool will host a discussion on “responding to the right wing threat” on July 12th, and then it’s all out at London at the weekend, with anti-fascists responding to Britain First’s threat to mobilise in support of Trump’s visit on Friday the 13th, and then against a big “Free Tommy” march through the capital on the 14th. If you’re not from London and fancy a trip down for the weekend, see here for a guide to transport being organised.

The Anti-Fascist Network have recently produced a guide to effective mass mobilisation, and Leeds AFN have a good set of FAQs about the “Free Tommy” movement:

Isn’t this different to the EDL?
The marches are largely not being held under the ‘EDL’ banner – although a recent one in York was. The EDL proper is now a relatively small concern on the far-right but the same currents that drove it have returned it to our streets once more.

Aren’t you supporting state incarceration of activists?
We are not cheerleaders for the state or the prison system, and believe empowered people and communities will ultimately overcome fascist threats better than the penal system ever will. Tommy’s recall for breach of the conditions of his suspended sentence have been deliberately misconstrued as a rush to miscarried justice, but was ultimately routine for the justice system. We believe Tommy’s martyrdom was largely choreographed – he was well aware of his conditions and broadcast his actions publicly on Facebook.

What about freedom of speech?
We don’t believe that hate speech, speech which advocates for the denial of liberty for specific minorities or oppressed groups, can really be considered ‘free’. Tommy aside, the rallies in support of him have consisted largely of hate speech – chants of “fuck Islam”, “Allah is a paedo”, and placards decrying the “rape of whites.” Perversely, Tommy’s intervention may have damaged the credibility of the proceedings and handed the defence ammunition to move for a mistrial.

Is it fair to criticise Islam?
As with Christianity and Christians, we believe it’s dangerous to conflate critique of Islam as a religion, with the demonization of Muslims as people. A religion – an idea – cannot be victimised, and it is right to look at religion critically. However, since the its inception the EDL, along with Tommy Robinson, and various associated movements across the right have used criticism of religion as a thin veil for their anti-Muslim hate speech. Instances of extreme adherence to the Christian faith, however, go undiscussed by these groups, because of the associated cultures and ethnicities.

Aren’t there valid feminist critiques of Islam?
There are valid feminist critiques of all organised religion – the world views and power structures involved are often toxic and patriarchal, preoccupied with policing and subjugating women. As with the free speech and anti-religious arguments, issues such as FGM, honour-based violence, and liberty for women at large, are being weaponised by the far-right. It’s disingenuous at best, when the narrative is so often simply one of saving “our women.” The Free Tommy march in Leeds on the 1st of June this year was majority white male by a massive margin, and on that basis alone it’s hard to take seriously the women’s rights angle. Conservative and reactionary politics are inherently hostile to feminism, no matter how much the right tries to cloak itself in an increasingly socially liberal world.

Is it racist to stand against grooming gangs and paedophiles?
Of course it’s not – unfortunately in spite of the numerous instances of sexual abuse on the right and amongst high-profile white offenders, the Asian grooming gang trope has become an emotive and effective mobilisation tool for the far-right. Naturally we saw no outcry from the ranks of the EDL, Britain First, et al when the Yew Tree revelations came to light as there’s no mileage in that for them. Everyone should be as disgusted by grooming gangs as they are Saville, and indeed all sexual abusers. Tommy Robinson’s decision to cast light only on Asian abusers is racist.

"The impulse to fight against work and management is immediately collective. As we fight against the conditions of our own lives, we see that other people are doing the same. To get anywhere we have to fight side by side. We begin to break down the divisions between us and prejudices, hierarchies, and nationalisms begin to be undermined. As we build trust and solidarity, we grow more daring and combative. More becomes possible. We get more organized, more confident, more disruptive and more powerful."
View all posts by nothingiseverlost →
This entry was posted in Racism, The right and tagged anti-fascism, Anti-Fascist Network, Tommy Robinson. Bookmark the permalink.