Repression and resistance round-up for early July: Cardiff, Bulgaria and beyond…

Posted on July 3, 2018 by nothingiseverlost

A quick round-up of repression-related news:

In Cardiff, three defendants facing charges related to an attempted disruption of an arms fair have just been acquitted.

In Bulgaria, the Bulgarian Prisoners’ Association have put out an urgent call for solidarity actions, as their members are facing increased harassment. Brighton ABC suggest a number of ways to support: “The BPRA has had many successes in struggle to establish better conditions for prisoners and against the arbitrary rule of the prison authorities. For this reason Jock and his comrades became a target of repression. Recently he had been charged by the prison administration with the distribution of BPRA stickers. According to the authorities, stickers with a slogan “When injustice becomes the law, resistance becomes a duty” are promoting racism and are hate speech! No-one explained against which race or national group those stickers are supposed to be directed, but as a result Jock had been stripped of all privileges for a period of 2 years. That means he had been stopped from continuing his university studies, his visits have been severely limited, he is not allowed any of the supervised leave that he had previously been granted and he has been refused any paid work.

This is a clearly fabricated charge and Jock, an anti-fascist prisoner, must be the only person in Bulgarian prison ever prosecuted for racism! This is an act of vindictive repression against him and all those connected with BPRA as the authorities are clearly unhappy about their activity. They need our solidarity.

What can you do?

– Send a protest email or letter to the Minister of Justice, Tsetska Tsacheva, and demand that the repression against Jock and others associated with BPRA cease, and that his privileges are reinstated:

[www.embassy-worldwide.com/country/bulgaria/ for list of places worldwide – details of the London embassy here]

– spread the information about this case

– write to Jock with messages of support:

Across Europe, police operations and raids continue in the wake of last year’s G20 protest in Hamburg. It’s Going Down has just published an English-language translation of a detailed interview on the subject, and Enough is Enough has fairly regular updates.

Freedom News also has a brief write-up on the subject of the repression faced by anarchists in Yogyakarta, Indonesia, since May Day there.

In the US, the growing revolt against ICE and border controls is developing too fast to keep track of – this feature from IGD has a good round-up of what’s been going on these last few days, and Crimethinc have a collection of a few accounts from the blockades, along with an account from the weekend’s antifascist clashes in Portland. Funds have been set up for both legal and medical costs coming from those events, although as far as I can see rally.org requires a US address and phone number before you can donate, so non-US residents wanting to lend a hand to those who confronted fascists in Portland may want to send their donations to Portland ABC or Rose City Antifa more directly.

Two final notes: The family of anarchist prisoner Eric King are going through some stress and asking for support, and you can help them out by purchasing this fundraiser compilation. In North Carolina, Glo Merriweather is still awaiting trial on trumped-up charges in retaliation for challenging the police narrative around a shooting during the Charlotte Uprising, and needs help with legal fees and paying their bills – you can donate here. 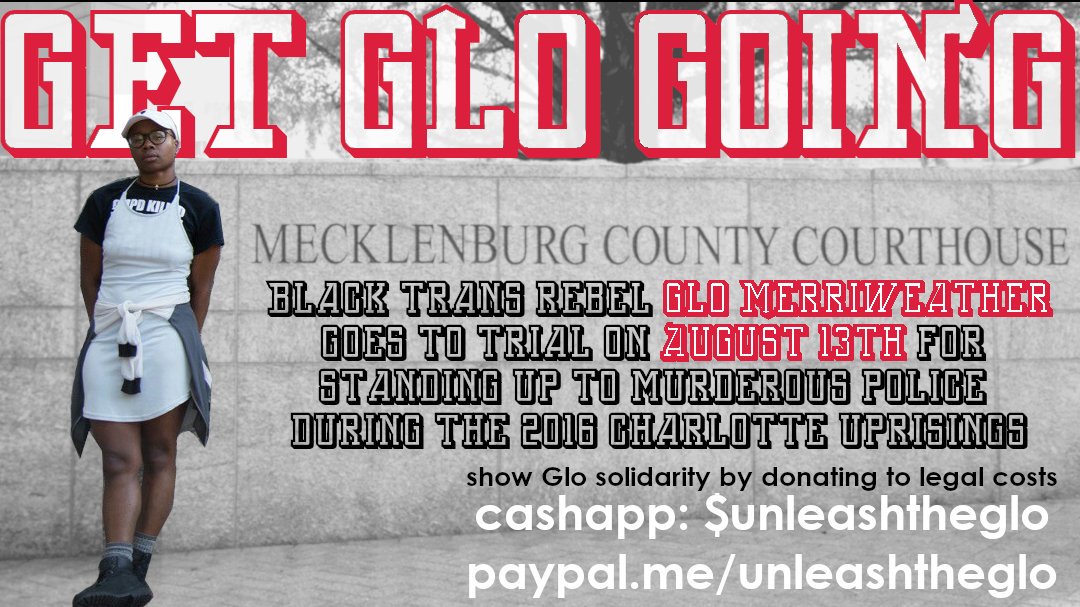 "The impulse to fight against work and management is immediately collective. As we fight against the conditions of our own lives, we see that other people are doing the same. To get anywhere we have to fight side by side. We begin to break down the divisions between us and prejudices, hierarchies, and nationalisms begin to be undermined. As we build trust and solidarity, we grow more daring and combative. More becomes possible. We get more organized, more confident, more disruptive and more powerful."
View all posts by nothingiseverlost →
This entry was posted in Anarchists, Repression and tagged arms trade, Bulgarian Prisoners' Association, Cardiff, Eric King, G20, Glo Merriweather, Jock Palfreeman, Portland Anarchist Black Cross. Bookmark the permalink.

2 Responses to Repression and resistance round-up for early July: Cardiff, Bulgaria and beyond…