Posted on August 5, 2018 by nothingiseverlost

A quick round-up of a few upcoming dates and recent(ish) stories:

Cleaners organising through the United Voices of the World union will be striking at Kensington & Chelsea Council and the Ministry of Justice from Tuesday 7th August-Thursday 9th, demanding sick pay, equal terms and conditions and a living wage. 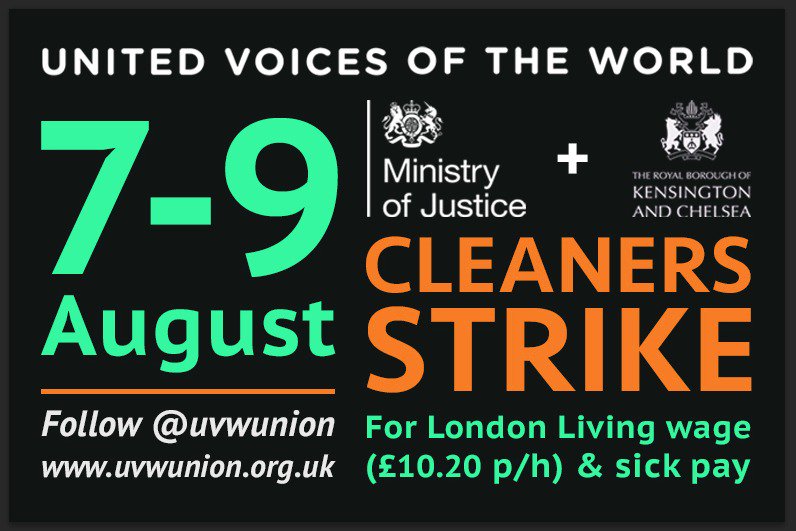 At Goldsmiths, cleaners and their supporters have called for an emergency demo on the morning of Monday 6th in response to an attempt to impose damaging shift changes at very short notice. On Wednesday 8th August in London, there’ll be an emergency meeting on fighting redundancies in universities that’s been called by the UCU Branch Solidarity Network, which seems to be an attempt at a rank-and-file network in the UCU coming out of the recent pensions dispute,

On Saturday August 11th, Birmingham homecare workers will be striking against huge cuts that’ll be imposed by making all fulltime staff redundant and then offering them their jobs back at reduced hours, and there’ll be a protest in the city centre supporting them.

The RMT “keep the guard on the train” dispute about driver-only operation continues, with action on South-West Railway continuing every Saturday for the next few weeks, so Saturday 11th being the next strike date.

The grassroots cleaners’ union CAIWU are fighting against the victimisation of one of their members at Ofcom, and it looks like the plan is for weekly protests at Ofcom every Friday from August 24th onwards until Teddy is reinstated.

Continuing the fight against austerity cuts in Birmingham, there’ll be a protest on September 11th in response to the council’s threats to close 14 nurseries.

A few recent stories you may have missed: IWW members at a hotel in Warrington have managed to secure hour-long breaks as part of their 12-hour shifts. The IWGB have filed a discrimination case on behalf of one of their members, a trans woman who was working as a van driver for “gig economy” cargo company Gnewt. Construction workers in Deeside, North Wales, have been protesting against attempts by employers to undermine national agreements and seriously underpay workers.

And a trio of victories: in Swansea, a sacked postie has been reinstated after almost 200 of his colleagues threatened to walk out in solidarity. At the Ritzy cinema, a tribunal found that two of three workers were unlawfully dismissed as part of Picturehouse Cinemas’ attempt to break union organising. There is a bittersweet note in that the third worker’s case couldn’t be heard as he’d been working there for less than two years and so couldn’t bring a claim, which really highlights the limits of these legalistic routes. And at Old Broad Street in London, cleaners organising through CAIWU were able to win the London Living Wage through the threat of strike action.

Finally, a few more miscellaneous upcoming events: Plan C’s annual Fast Forward Festival will be running from August 17th-19th in Derbyshire, on the theme of “Building Autonomy: Concrete Plans towards Red Horizons”, Leicester Anarchist Communist Group will be having a reading group on the Makhno-Malatesta debate about organisation on August 30th, and there’ll be bookfairs happening in Bradford on September 8th and Swindon on September 15th.

"The impulse to fight against work and management is immediately collective. As we fight against the conditions of our own lives, we see that other people are doing the same. To get anywhere we have to fight side by side. We begin to break down the divisions between us and prejudices, hierarchies, and nationalisms begin to be undermined. As we build trust and solidarity, we grow more daring and combative. More becomes possible. We get more organized, more confident, more disruptive and more powerful."
View all posts by nothingiseverlost →
This entry was posted in Anarchists, Protests, Strikes, Unions, Work and tagged Anarchist Communist Group, CAIWU, CWU, Industrial Workers of the World, IWGB, Picturehouse Living Wage, Plan C, RMT, United Voices of the World. Bookmark the permalink.