Posted on September 27, 2018 by nothingiseverlost 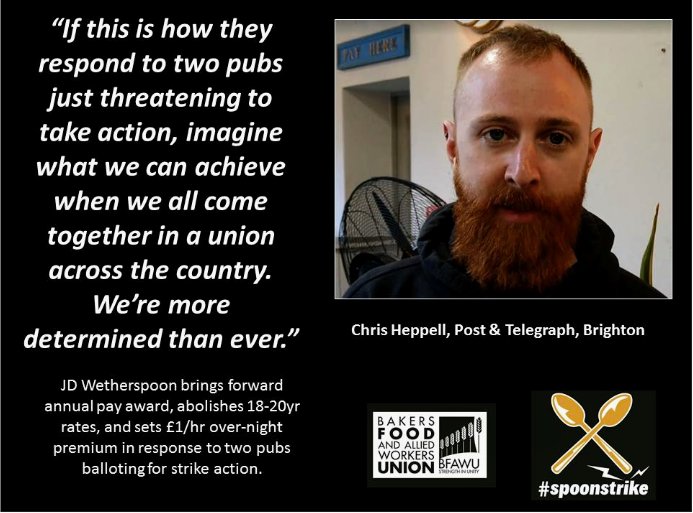 Ahead of the Wetherspoons strike on October 4th, a new bulletin for Wetherspoons workers is being published. You can contact the authors at spoonstrike@gmail.com. Meanwhile, people in London can also pick up leaflets about the IWW call for a couriers’ strike from Freedom bookshop and Housmans, or use this image to print your own off if you have access to a printer. A strike fund has also been set up here.

Below is the main article from the new bulletin:

It can be hard to live on the money we make. We spend most of our wages on renting damp flats, we have to walk to work when we can’t afford the bus, and we have to choose between dinner and a haircut. We’re forced to work as fast as we can for long shifts with barely any breaks, even when we’re sick or injured. We’ve seen the people we work with struggling to make ends meet, sofa surfing and scraping by. Meanwhile, Tim Martin is worth £322 million. Our work has made him, the bosses, and the shareholders rich beyond our wildest dreams, but we’re left a few weeks’ pay away from poverty.

We won’t take it anymore. That’s why we’re fighting back. They won’t listen to us when we complain, so we’re taking the next step. In two Brighton pubs we’ve taken the decision to all stop work and go on strike on October 4th. We’re fighting for £10 an hour and union recognition for every Wetherspoons worker in the country.

On your own, you can’t change anything. Hiding in the freezer, stretching out your break time, getting another job – none of it solves the problem. The bosses have all the power and they don’t give a shit about us. We know that we will only win when we fight together.

How do we know that we win when we fight together? Because we’re already winning. The recent pay rises didn’t come out of thin air.

In the past, millionaire shitlord Tim has argued against the idea that all workers deserve a living wage. He thinks it’s ‘unrealistic’ that we get paid enough to get by. But suddenly, just after two pubs announced they were going to vote on strike action, he changed his mind. Now we’ve shown we can stick up for ourselves, generous Tim is willing to give us a couple of quid extra out of the profits we make.

The abolition of 18-20 youth rates means than some workers will be going £6.60 an hour to £8.26. That’s two pounds an hour better – all because workers at just two pubs stood up to Tim and the bosses. Night shifts will get paid a pound extra per hour, and the tiny annual pay rise has been brought forward a few months. But it’s not enough. At minimum, we deserve £10 an hour – because everyone deserves a wage you can live on in comfort.

But as well as the national pay rise, we’ve managed to get stuff changed in both of our pubs. At the Post and Telegraph we gave our pub manager a letter signed by half the staff complaining about the way our rotas were done, and things were changed immediately. At the Brighthelm, we handed in a letter complaining about the introduction of night shifts and they were stopped straight away.

If just two pubs in one city can force the bosses to give us a national pay rise, then what could ten pubs do? What about twenty?

We need the get organised all over the country if we want to win more. Tim can afford to give up a bit of his £322 million to the people who work hour after hour making food, cleaning toilets, closing up and taking stock. But he won’t do it unless we force him too. The only way to force him too is to organise and fight back.

In Brighton, we’re members of the Bakers Food and Allied Workers’ Union (BFAWU). Unions are groups made up of lots of workers. Together, as part of a union, we can organise to immediately change our own lives. When you’re in a union, you don’t have to put up with a bad job, terrible wages, bullying managers or the rest of it.

We’re asking you, workers at other pubs across the country, to join the union and organise where you are. There are over 900 spoons across the UK. Workers in as many of those as possible need to get organised and take part in the movement. There are tens of thousands of us and only a few of them – together, we can run our pubs for the many not the few.

"The impulse to fight against work and management is immediately collective. As we fight against the conditions of our own lives, we see that other people are doing the same. To get anywhere we have to fight side by side. We begin to break down the divisions between us and prejudices, hierarchies, and nationalisms begin to be undermined. As we build trust and solidarity, we grow more daring and combative. More becomes possible. We get more organized, more confident, more disruptive and more powerful."
View all posts by nothingiseverlost →
This entry was posted in Strikes, Unions, Work and tagged BFAWU, Notes From Below, Wetherspoons. Bookmark the permalink.

1 Response to Spread the Spoons Strike – new bulletin out now!