Posted on September 30, 2018 by nothingiseverlost 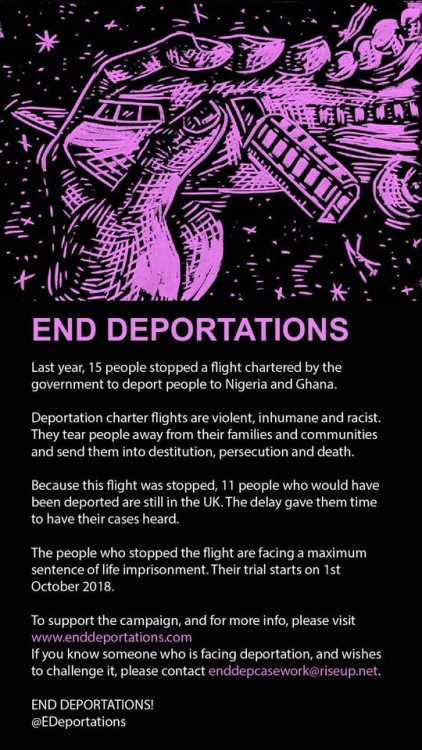 On October 1st, the Stansted 15, people who blocked a deportation flight and are now facing terror charges that could lead to life imprisonment, will be facing trial at Chelmsford Crown Court. Support is requested throughout the trial. You can also donate to cover general campaign costs here.

In other UK repression news, the Incarcerated Workers Organising Committee have shared a number of updates, calling for a campaign to get trans IPP prisoner Taylor to a prison where he’ll be able to take a mental health course, asking for support for Nardein, a prisoner with PTSD who’s trying to get a psychiatric assessment that could win her freedom, and helping publicise the new Corporate Watch report on prison expansion, Prison Island.

Elsewhere, former YPG volunteer Joe Robinson has been jailed in Turkey – I know there was a solidarity demo, but don’t know if there’s any kind of ongoing campaign organised.

In Madrid, Jorge is facing a potential prison sentence for resisting an eviction, and in Russia, the ongoing campaign of repression against anarchists and antifascists continues, with Arman Sagynbayev providing a new account of his torture, and three of the defendants being formally indicted on terrorism charges.

"The impulse to fight against work and management is immediately collective. As we fight against the conditions of our own lives, we see that other people are doing the same. To get anywhere we have to fight side by side. We begin to break down the divisions between us and prejudices, hierarchies, and nationalisms begin to be undermined. As we build trust and solidarity, we grow more daring and combative. More becomes possible. We get more organized, more confident, more disruptive and more powerful."
View all posts by nothingiseverlost →
This entry was posted in Anarchists, Repression and tagged deportations, Incarcerated Workers Organizing Committee, Russia, Stansted defendants, YPG. Bookmark the permalink.

1 Response to Stansted 15 trial starts, and other repression news