Uber Drivers to strike for 24 hours in London, Birmingham and Nottingham on October 9-10th, and other upcoming events

Posted on October 8, 2018 by nothingiseverlost

IWGB is calling 24 hour strike of Uber drivers in London, Birmingham and Nottingham from 1pm on 9 October Demonstrations to be scheduled at 1pm on 9 October at Uber’s offices in each of the cities. Drivers demand an increase in fares, an end to unfair deactivations and that Uber respect rulings on worker rights.

8 October: The United Private Hire Drivers (UPHD) branch of the Independent Workers Union of Great Britain (IWGB) has today called a 24 hour strike of Uber drivers in London, Birmingham and Nottingham from 1pm on Tuesday 9 October. Drivers will be staging protests outside Uber’s offices in each of these cities at the start of the strike. Details on location can be found below.

James Farrar, Chair of the IWGB’s UPHD branch, said: “After years of watching take home pay plummet and with management bullying of workers on the rise, workers have been left with no choice but to take strike action. We ask the public to please support drivers by not crossing the digital picket line by not using the app during strike time.”

The strike will combine the IWGB’s efforts to secure private hire drivers rights as limb (b) workers through the courts, with ongoing cases against Uber, Green Tomato Cars and A2B Cars, as well as building on previous protests against London transport regulator Transport for London.

The IWGB and co-claimants Yaseen Aslam and James Farrar will be facing Uber at the Court of Appeal on 30 and 31 October on the landmark employment rights case. Farrar and Aslam are being represented by solicitors Bates Wells Braithwaite and barristers Jason Galbraith-Marten QC and Sheryn Omeri from Cloisters.

Also, just a quick round-up of a few upcoming events over the next few weeks:

On Saturday 13th, there’s the big demo that’s been called against the far-right DFLA in London, featuring both a feminist bloc and the first street outing for the newly-formed Football Lads & Lasses Against Fascism.

The weekend after that will see the Not the Anarchist Bookfair in London, while the IWW  will be hosting an organising summit in Sheffield. And at the end of the month, on the 27th Lesbians and Gays Support the Migrants will be hosting a Halloqueen party in London as a fundraiser for the Stansted 15 whose trial will be ongoing, Haringey Anti-Raids will be having a party to celebrate their second birthday on the same day, and further north Dodsworth WMC will be hosting a fundraiser to pay for repairs to a historic NUM banner. And finally, going back to the IWGB again, on the 30th they’ll be hosting a “rise of the precarious workers” demo to join up various campaigns they’re currently involved with. 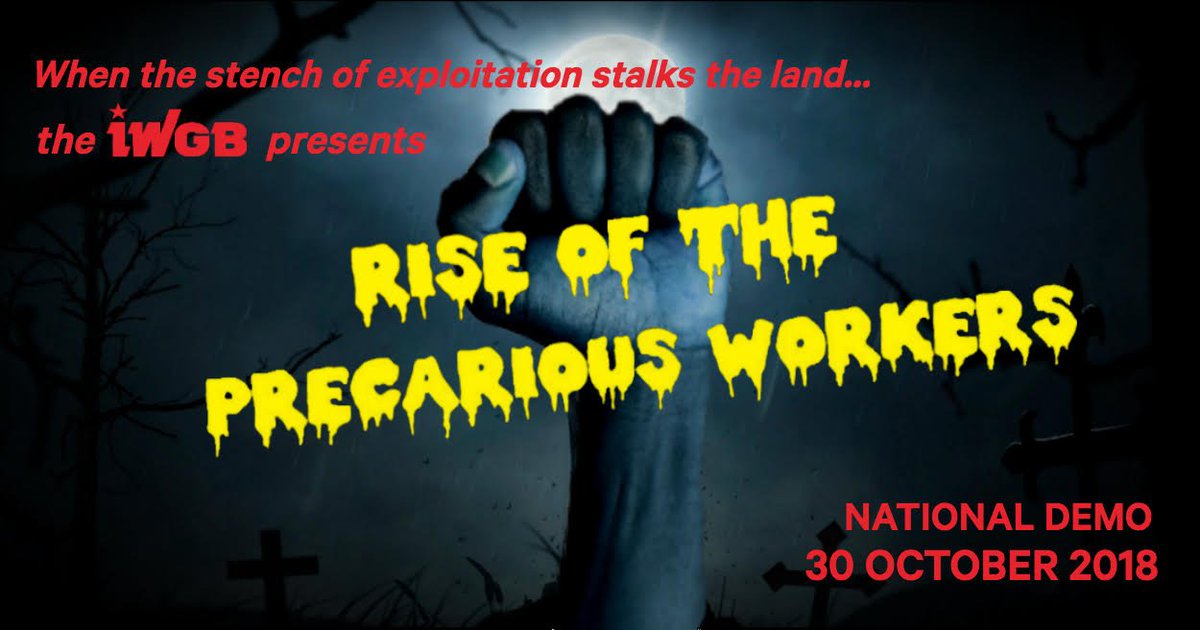 "The impulse to fight against work and management is immediately collective. As we fight against the conditions of our own lives, we see that other people are doing the same. To get anywhere we have to fight side by side. We begin to break down the divisions between us and prejudices, hierarchies, and nationalisms begin to be undermined. As we build trust and solidarity, we grow more daring and combative. More becomes possible. We get more organized, more confident, more disruptive and more powerful."
View all posts by nothingiseverlost →
This entry was posted in Anarchists, Protests, Racism, Strikes, The right, Unions, Work and tagged anti-fascism, Anti-Fascist Network, IWGB, Stansted defendants, Uber. Bookmark the permalink.

3 Responses to Uber Drivers to strike for 24 hours in London, Birmingham and Nottingham on October 9-10th, and other upcoming events