‘Out of control’ Home Office should have been in the dock, not us: Stansted 15 respond to guilty verdict

Posted on December 10, 2018 by nothingiseverlost 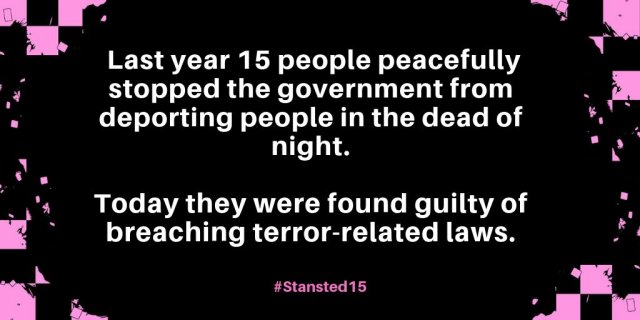 An emergency protest has been called for Tuesday afternoon outside the Home Office in solidarity with the defendants. 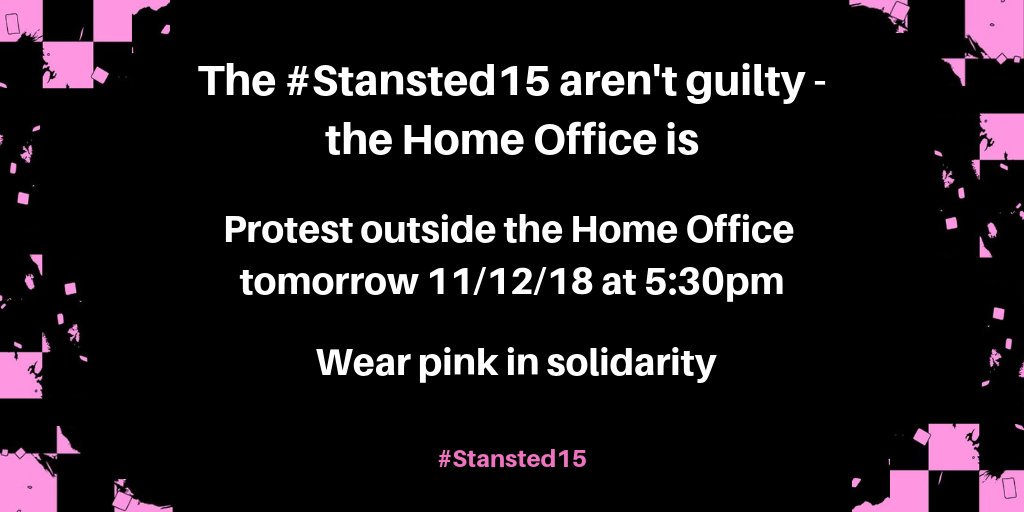 The Stansted 15 will be appealing this decision, you can donate to their legal costs here.

Via Lesbians and Gays Support the Migrants:

The Stansted 15 protesters, who stopped a government deportation flight from taking off in March last year, have today been found guilty of breaching terror laws [1]. After 9 weeks the jury found all fifteen defendants guilty of intentional disruption of services and endangerment at an aerodrome under the 1990 Aviation and Maritime Security Act – a controversial use of terror-related law.

The Stansted 15 were accused by the government of putting the safety of the airport and passengers at risk, a charge rejected by all 15 defendants. The trial followed a peaceful action which stopped a chartered deportation flight from taking off in March 2017. The defendants could now face up to life in prison. Sentencing will take place soon.

Responding to the verdict in a statement the Stansted 15 said:

“We are guilty of nothing more than intervening to prevent harm. The real crime is the government’s cowardly, inhumane and barely legal deportation flights and the unprecedented use of terror law to crack down on peaceful protest. We must challenge this shocking use of draconian legislation, and continue to demand an immediate end to these secretive deportation charter flights and a full independent public inquiry into the government’s ‘hostile environment’.”

“Justice will not be done until we are exonerated and the Home Office is held to account for the danger it puts people in every single day. It endangers people in dawn raids on their homes, at detention centres and on these brutal flights. The system is out of control. It is unfair, unjust and unlawful and it must be stopped.”

Melanie Strickland, one of the defendants, said:

“To be found guilty of a terror-related charge for a peaceful protest is devastating for us, and profoundly disturbing for democracy in this country.  It’s the Home Office’s brutal, secretive and barely legal practice of mass deportation flights that is putting people in danger, and their ‘hostile environment’ policy that is hurting vulnerable people from our communities. It’s the Home Office that should have been in the dock, not us.”

A man who was set to be deported on the flight but has since been granted a right to remain in the UK said:

“The Stansted 15 have been found guilty of breaching a barely used terror law. Though the jury were convinced that their actions breached this legislation, there’s no doubt in my mind that these 15 brave people are heroes, not criminals. For me a crime is doing something that is evil, shameful or just wrong – and it’s clear that it is the actions of the Home Office tick all of these boxes – and the Stansted 15 were trying to stop the real crime being committed.

‘As the Stansted 15 face their own purgatory – awaiting sentences in the following weeks – I will be praying that they are shown leniency. Without their actions I would have missed my daughter’s birth, and faced the utter injustice of being deported from this country without having my now successful appeal heard. My message to them today is to fight on. Their cause is just, and history will absolve you of the guilt that the system has marked you with.’

Raj Chada, Partner from Hodge Jones & Allen, who represented all 15 of the defendants said:

“We are deeply disappointed by today’s verdicts. In our view it is inconceivable that our clients were charged under counter terrorism legislation for what was a just protest against deporting asylum seekers. Hodge Jones & Allen previously represented 13 defendants who protested at Heathrow in similar circumstances to the 15 at Stansted, yet they were not charged with this draconian legislation. We believe this was an abuse of power by the Attorney General and the CPS as they should never have been charged with these offences. The fact is that the actions of these protestors resulted in two people who were about to be wrongfully deported remaining in the UK.”

Or email us on enddeportationsscf@gmail.com

Spokespeople are available for broadcast interview.

Photos of the Stansted 15 can be found here on Getty Images, or via photographer Kristian Buus.

[1] Helen Brewer, Lyndsay Burtonshaw, Nathan Clack, Laura Clayson, Mel Evans, Joseph McGahan, Benjamin Smoke, Jyotsna Ram, Nicholas Sigsworth, Alistair Tamlit, Edward Thacker, Emma Hughes, May McKeith, Ruth Potts and Melanie Stickland were charged with intentional disruption of services at an aerodrome under the 1990 Aviation and Maritime Security Act, a law passed in response to the 1988 Lockerbie bombing that has only been used once before in 28 years. The defendants, aged 27 to 44, all pleaded not guilty to the charge.

When the defendants stopped the plane, they knew that:

One woman’s former husband had threatened to kill her on arrival in Nigeria, because of her sexuality.

One man had threatened to commit suicide because he had no friends or family in Nigeria.

At least two people who were supposed to be on the plane have since been identified as trafficking victims.

These are just the stories the defendants knew about. There are countless examples of people being sent to countries where they are at risk of serious harm, even death.

The defendants also knew that:

The people on the plane risked verbal and physical abuse from the security guards accompanying them. Independent observers have witnessed racist and misogynist abuse, and excessive use of force by guards, and that was when there were observers on the plane. This kind of abuse appears to be the rule, rather than the exception.

There is ongoing concern about the use of restraint. Waist restraints that are only supposed to be used in exceptional circumstances appear to be the norm. In 2017, HM Chief Inspectors found that 74 staff used restraints on 22 out of 23 people on a flight to France and Bulgaria, and all 60 people were restrained on a flight to Germany.

What happened as a result of the action?

One man, who was due to be on the flight was able to return to his partner, who was already in labour, for the birth of their child. He has now been granted leave to remain so can stay with his family.

Eleven people are still in the country and continuing their appeals because the flight was stopped, at least two are victims of trafficking.

When the defendants stopped the plane, the Home Office were deporting people who were victims of trafficking, when the courts had told them not to.

1. Charter flights refer to the government practice of paying for entire flights to send large numbers of people to specific countries. The flights contain only the people being sent away from the UK and private security guards. They take off late at night from undisclosed locations, hiding them from public view.

2. Investigations by Corporate Watch have revealed that the government uses racial profiling to select people for deportation so that it can fill planes, including people with active legal claims.

3. “Reserve” deportees are taken to the airport to fill up the places of individuals whose lawyers are successful in making last-minute challenges. The people who are “reserve”’ are not told whether they will be deported on the flight right up until they are either put on the plane, or the plane departs. If they are not deported they may be sent to a different detention centre from the one they left. The Chief Inspector of Prisons and the Home Affairs Committee have recommended the use of reserves on deportation charter flights cease. The practice continues.

4. There is substantial evidence that people being deported experience violence and abuse on these covert flights. People going on the flights are handcuffed, waist restraint belts an independent panel advised should only be used in exceptional circumstances are regularly used, and some are strapped to their seats. Private security guards still use the same restraint techniques that led to the death of Jimmy Mubenga. 60-70 people will be deported on one flight and accompanied by about twice as many guards as people being deported.

5. The flights are operated by a number of private aviation companies and security companies, including Tascor, a subsidiary of Capita, and previously G4S. In May 2018, Mitie, a Bristol-based outsourcing firm took over the contract from Tascor.

6. Thousands of people are deported from the UK in this way each year.

7. Deporting people in this way costs millions. The contract for the security escorts alone is worth £52 million a year, according to Mitie, who over the contract in May 2018.

8. The UK began using charter deportations in 2001. The flights were introduced by new labour specifically to deport people who had sought asylum in the UK.

9. Then Home Secretary, Jack Straw, agreed an arbitrary target of 30,000 deportations a year based on the assumption that almost half of all asylum applications would be rejected. This arbitrary target was called unworkable and unrealistic by the Home Affairs Select Committee in 2005, but target culture has continued to drive the way people seeking asylum are treated in the UK.

10. Former Home Secretary Amber Rudd was forced to resign when it emerged, during the Windrush scandal, that she had lied to parliament about the existence of targets for immigration removals. Before she resigned she claimed that the targets had been scrapped, but it’s hard to see how such an entrenched approach would change easily.

11. In 2014, the Guardian revealed that Home Office officials were rewarded for hitting targets of rejecting asylum claims in tribunals with shopping vouchers, extra pay and extra holiday. More recently it was alleged that officials received bonuses of thousands of pounds for meeting or exceeding removal targets.

12. The countries people are sent to are often countries Britain has intervened in militarily, or where there is political instability. The first flights were to Kosovo and Albania, then Romania and the Czech Republic with Roma people the main targets. In 2003 charters began to Afghanistan, newly declared “safe”. More recently, Pakistan has taken over as the UK government’s main charter deportation “partner”, after a deal was struck with the Pakistani government in 2011, as part of a larger trade and aid negotiation. African countries are also now regular destinations, notably Nigeria, Ghana and (until recently) the Democratic Republic of Congo. September 2016 also saw a charter flight to Jamaica, the first since 2014. Flights to Iraq and Sri Lanka have stopped for now, after successful political and legal campaigns involving refugee movements from these countries. Flights to Afghanistan have also stopped, but they continue from other European countries, and many fear they will also soon resume from the UK

End Deportations is a campaign to stop the brutal, secretive and barely legal practice of deporting large groups of people using charter flights. We need to ask serious questions about the brutal and inhumane detention system.

"The impulse to fight against work and management is immediately collective. As we fight against the conditions of our own lives, we see that other people are doing the same. To get anywhere we have to fight side by side. We begin to break down the divisions between us and prejudices, hierarchies, and nationalisms begin to be undermined. As we build trust and solidarity, we grow more daring and combative. More becomes possible. We get more organized, more confident, more disruptive and more powerful."
View all posts by nothingiseverlost →
This entry was posted in Repression and tagged deportations, End Deportations, Lesbians and Gays Support the Migrants, Stansted defendants. Bookmark the permalink.

2 Responses to ‘Out of control’ Home Office should have been in the dock, not us: Stansted 15 respond to guilty verdict