Fault lines: a few reflections on 2018

Posted on January 1, 2019 by nothingiseverlost

At this time of year, I usually try to provide some kind of an overview, but it feels pretty far beyond me at the moment. A few people have mentioned how long this year’s felt, and how it feels strange to realise that the tide pod meme and the losses of Mark E Smith and Ursula K LeGuin were all this year. These notes will be pretty heavily UK-centric, so look elsewhere for reflections on recent events in Haiti, Iran, China or Russia.

The South Essex Heckler, Freedom News, the IWW, and Brighton SolFed have all published reflections on the year which are worth a read, along with this short piece from the ACG; if you want predictions about what the future might hold, I think Peter Gelderloos’ “Diagnostic of the Future” is an essential read, along with Don Hamerquist’s three-part series, “new stuff from an old guy”.

Looking back on the year that was, I think the UCU strike, way back in March, was an important moment, both in terms of being an unusually determined dispute on a national scale, and for the level of rank-and-file autonomy shown in the membership mobilising with incredible speed to reject the first attempted stitch-up deal; the RMT “keep the guard on the train” dispute, which has dragged on throughout the year and shows no sign of letting up in 2019, seems to have received virtually no attention from much of the libertarian left, aside from one interview on the New Syndicalist, as it seems like the employers, openly backed up by the state, are going all-out to try and break one of the last bastions of organised workers’ power in the UK. 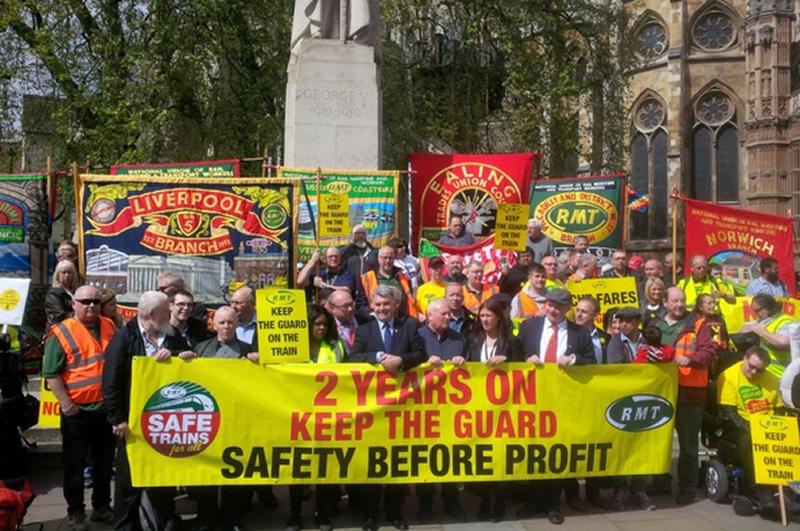 Meanwhile, a wave of wildcats among post workers made it into Vice, and ongoing organising in the service sector led to some impressively coordinated action on October 4th. While different unions involved are pursuing different strategies, I don’t think it’s quite as simple as “proper workers’ self-organisation among couriers vs. top-down publicity stunts elsewhere”, as Brighton Spoons staff seem to be building real workplace power at a local level, something we can only hope will spread in the new year. The IWW Couriers’ Network, meanwhile, may have to shift to a more defensive stance in the short term, as both Uber Eats and Deliveroo have just pushed through sackings to try and break militancy in the sector. 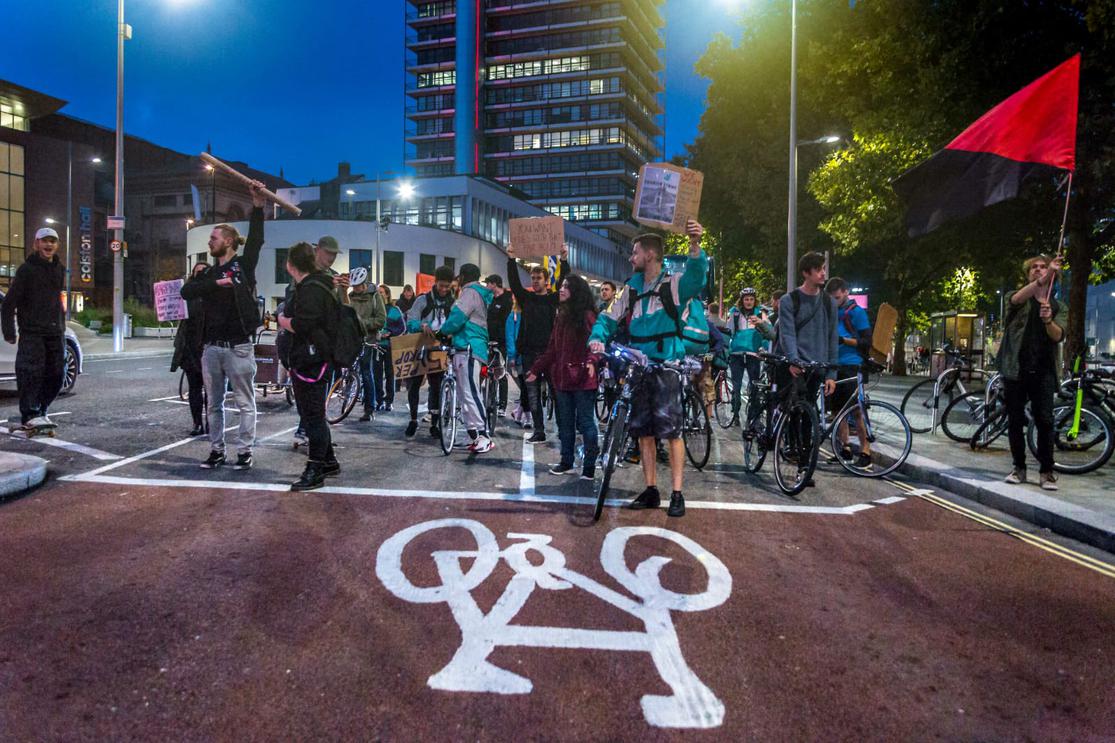 Striking couriers in Bristol in October

The huge strike for equal pay in Glasgow, which again, doesn’t seem to have been that widely discussed among libertarians, even though it saw hundreds of workers in relatively-well-paid male-dominated jobs, who weren’t included in the pay claim, break the anti-strike laws by taking unoffical action in solidarity, stands out as a truly inspiring moment, tackling issues that bring gender and class together, and doing so through inclusive mass working-class direct action.

Looking ahead, one workplace dispute that could be big next year (apart from, as I’ve mentioned, the ongoing campaign to keep the guards on the train) is the ballot currently taking place over school funding among teachers at all state schools and sixth forms in England. Will teachers manage to show a similar level of courage, determination, inventiveness and self-organisation to that seen in this year’s HE dispute, or preferably even surpass it? Time to start bringing out new copies of the Education Worker bulletin?

On a more reflective note, trying to think of themes that have run through this year, one that comes to mind is how messy many conflicts have been: not just clashes between movements and the state, or even between rival movements, as clashes of different perspectives inside movements. Over the Channel, the deeply contested nature of the yellow vest movement has made that very clear, but here the conflicts that have opened up in response to the gender recognition act*, as well as the ongoing debates over left anti-semitism and the very-much-related backlash against the international red-brown alliance that’s brought leftists and fascists together in support of Assad, summed up by prominent Corbynist MP Chris Williamson meeting with Vanessa Beeley, an Assadist with extensive far-right links, and now having to apologise for being daft enough to defend Gilad Atzmon.

In the year ahead, we can hope for more moments that look like the mass strike against Glasgow council, but I strongly suspect we’ll find ourselves caught up in more and more three-way (or more!) fights. If every British leftie’s dream for the new year comes true, and we do get something that looks like our version of the yellow vest movement, then just like our comrades in France, I suspect we’ll need to be in struggle with the people we’re marching alongside every bit as much as the authorities that we’re marching against.

Oh, and I realise that this post hasn’t said much, or indeed anything, about Brexit, but let’s be honest, is there anyone out there really thinking “God, I haven’t read or heard enough about Brexit lately?”

See you on the streets!

*thinking about things that got talked about and things that didn’t get talked about this year, I’m still bitter when I think about all the people who are apparently super concerned about defending women’s spaces from the threat of trans inclusion, but had nothing to say about defending Louise Harrison in Doncaster and the campaign to keep South Yorkshire Women’s Aid open.

"The impulse to fight against work and management is immediately collective. As we fight against the conditions of our own lives, we see that other people are doing the same. To get anywhere we have to fight side by side. We begin to break down the divisions between us and prejudices, hierarchies, and nationalisms begin to be undermined. As we build trust and solidarity, we grow more daring and combative. More becomes possible. We get more organized, more confident, more disruptive and more powerful."
View all posts by nothingiseverlost →
This entry was posted in Gender, Protests, Strikes, Unions, Work and tagged Anarchist Communist Group, antisemitism, couriers, Deliveroo, Freedom newspaper, glasgow, Industrial Workers of the World, Peter Gelderloos, red-brown alliances, RMT, Solidarity Federation, South Essex Heckler, transphobia, UBER Eats, UCU. Bookmark the permalink.

1 Response to Fault lines: a few reflections on 2018