Quick notes on the Free Tommy mob – Manchester, London, and beyond

Posted on August 1, 2019 by nothingiseverlost

A few statements have come out in the wake of last weekend’s events, when a Free Tommy demonstration in Manchester, seemingly totally unopposed, trashed a lefty stall in the town centre.

“Plan C LDN stands in solidarity with our comrades in the Revolutionary Communist Group (RCG) Manchester who were attacked by supporters of Tommy Robinson over the weekend.

Last Saturday, 27th July, over 100 Tommy Robinson supporters marched through Manchester city centre unhindered by a small police presence, to hold an impromptu rally inside the city’s Arndale shopping centre. After unfurling some shit banners and threatening members of the public, the mob attacked comrades in the RCG who were hosting a stall on the street outside to celebrate Cuba’s Revolution Day; hurling physical threats and racially abuse whilst trashing the Group’s table and materials. Unsurprisingly, Greater Manchester Police did nothing to stop the vicious attack despite requests for assistance – no arrests or charges have been made.

This is the latest in a series of attacks against members of the left by Tommy Robinson’s supporters, who have once again been given a free pass by the Police. In July 2018, a gang of 20 nazi thugs attacked a group of Trade Unionists from the RMT in London who were enjoying a drink after an anti-fascist rally. Several workers were hospitalised after defending themselves from the attack.

The far right will plan to march in London on Saturday 3rd August once again under the banner of ‘Free Tommy’. We will be there alongside comrades in antifascist, feminist, and migrant solidarity groups to oppose the politics of Tommy Robinson and to show the far right we will never let them have the streets. London is anti-fascist.

The Stop Tommy demo in London is meeting at Piccadilly Circus at 10:30 sharp on Saturday morning.

From Football Lads and Lasses Against Fascism:

“In Manchester, 57 years ago, Oswald Mosley & his resurgent fascist movement were quite literally put on their arses & run out of the city. Last Saturday, the far-right were able to parade around the Arndale & Manchester city centre without opposition. Mancunia has a proud tradition of militant anti-fascism, from the 43 Group to the 62 Group to the ANL Squadists & AFA (Anti-Fascist Action). In the absence of effective political or physical opposition to fascism in Manchester, FLAF will commit itself to reviving the real traditions of militant anti-fascism in the city.”

There was also one from the city’s “161 Crew”, which reads quite a lot like a throwing in of the towel:

“Social Duty –
161 Crew MCR have repeatedly set out its position regarding how militant anti fascism responds to discharging a social duty.

Working Class Organising with Trade Unions –
That social duty has many facets, meaning working class communities must organise from its roots of working class resistance to rise a force that can meet and counter the rise of right wing hatred either on the streets or in their communities.

The communities must look to the Trade Union movement, Labour, and left wing grass roots groups such as Momentum to assist in putting a visible opposition on the streets to counter the right wing presence. This should be well defended but not lead inexperienced members of the public into unnecessary danger or arrest.

When the right wing attacked an RMT picket, at Manchester Victoria Station on the 5th January 2019. We saw working class community mobilisation involving Trade Unions and left wing groups the following week. This demonstrates that relationship already exists, and must be built upon.

State Controlled Theatre –
Groups who set up stalls and put on events should only do so if they are confident of defending themselves. Groups should cease expecting militant anti fascists to attend city centres and play superhero bodyguards.

Such a theatre is controlled by the police both overtly and covertly. It allows for the easy identification of activists by police and often leads to avoidable arrests which would jeopardise the ongoing vital working class community cohesion programmes that activists may be advancing.

Not an Emergency Service –
161 Crew MCR have repeatedly made clear, the theatre of engagement is chose by them, and them alone. Engaging with fascists should be done when discreet and opportune, in the tradition of Anti Fascist Action/Red Action. The situation is not critical enough to warrant another wave of unnecessary court cases and bail conditions.

Media –
Most propaganda from the right in the modern era takes place online. The streets is no longer the main concern for the right. They know they can reach far more via the web. We cannot no platform someone on YouTube or social media. The answer is to develop an alternative media operation and develop media personalities.

161 Squads are not a rent a mob or some kind of emergency service for the left, and never will be.

We stand with working class communities, to advance community cohesion.

Aside from the fact that this seems to totally rely on Labour and Momentum to provide political guidance and leadership for the antifascist movement, I can appreciate why people might want to stay off CCTV and engage in more covert activities instead, but whatever quiet stuff they’ve been getting up to doesn’t seem to have dented the confidence of Manchester’s fascists much. As the 161 Crew admit, last weekend’s events didn’t come out of nowhere, but are a continuation of a solid campaign of far-right activity in the city with little opposition – going back and revisiting the video of the fascists abusing the RMT picket from January, it’s notable that some of the loudest voices are scousers complaining that they can’t operate in Liverpool. There’s clearly a lot of work that needs doing if we’re to ensure that fascists don’t see any of our towns and cities as soft touches.

If you can make it to London on the 3rd, that’ll be a good start; but beyond that, let’s make sure that last weekend is the last time a regional “Free Tommy” demo get to throw their weight around totally unopposed. 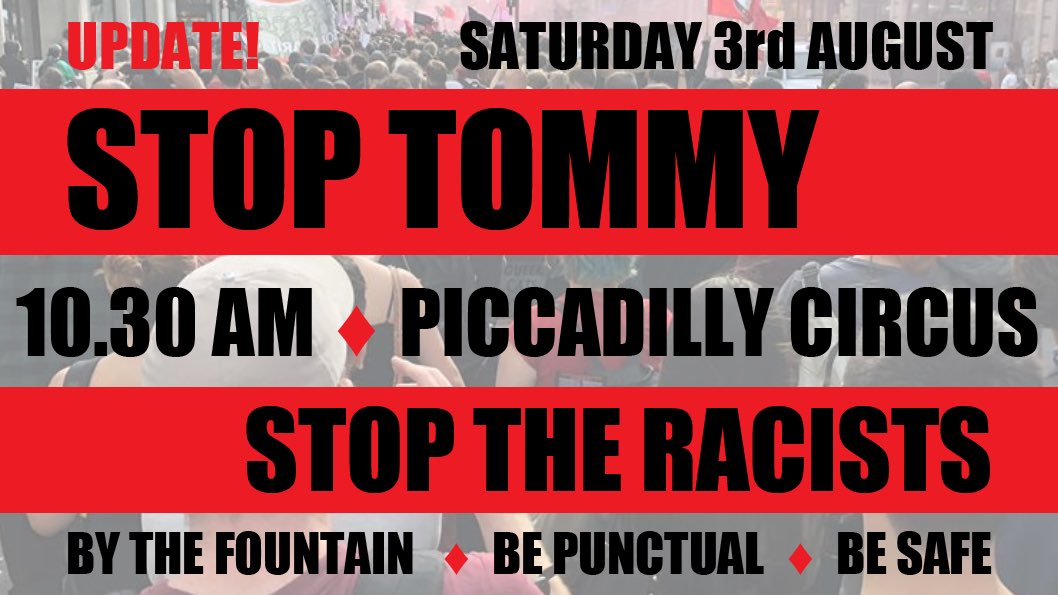 "The impulse to fight against work and management is immediately collective. As we fight against the conditions of our own lives, we see that other people are doing the same. To get anywhere we have to fight side by side. We begin to break down the divisions between us and prejudices, hierarchies, and nationalisms begin to be undermined. As we build trust and solidarity, we grow more daring and combative. More becomes possible. We get more organized, more confident, more disruptive and more powerful."
View all posts by nothingiseverlost →
This entry was posted in The right and tagged anti-fascism, Football Lads & Lasses Against Fascism, Plan C, Tommy Robinson. Bookmark the permalink.

4 Responses to Quick notes on the Free Tommy mob – Manchester, London, and beyond