Posted on September 10, 2019 by nothingiseverlost 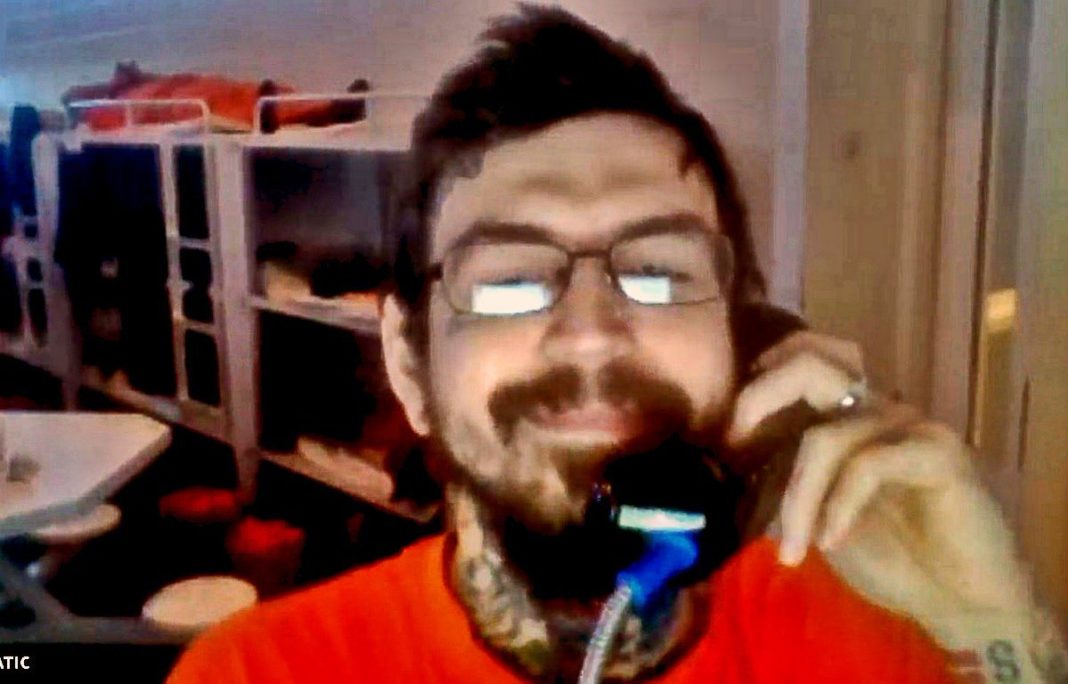 The following report is reproduced, with some minor edits, from the Support Eric King site:

For folks who are unaware, Eric is an anarchist and anti-fascist prisoner who was sentenced to 10 years for an attempted arson, an action in solidarity with the Ferguson uprising in Kansas city. Throwing two Molotov cocktails into an empty state representative’s office at night time. He has since remained outspoken against the prison system, exposing abuses and standing tall in the face of constant attacks and oppression.

In August of last year, Eric was dragged into a broom closet and attacked by Lt Wilcox at FCI Florence. Attacked because he is an anarchist and anti-fascist. It was timed to line up with the surgery for his wife’s cancer. He was subsequently tortured and abused and never checked out medically despite being kicked in the head for 5 plus minutes, and tied to a 4 point restraint for 8 hours, having to urinate himself resulting in nerve damage to his wrists.

An indictment against Eric, alleging that he attacked the officer, was originally filed in May, but they waited for the painful anniversary of the traumatic incident itself to serve the indictment to him. Since the original indictment was filed, he has been attacked twice at the orchestration of the Bureau of Prisons. Once by being blatantly led into a fenced in area where a fash was waiting to attack while the guards watched, and once by putting someone who was known to have attacked the last cellmates in his cell. In addition, several attempts had been made to attack him at earlier points during his sentence.

Since the attack he was unable to see or talk to his family for a year, kept in segregation, not allowed even the most basic needs such as the right to read a book or have a photo. He was denied medical care as he begged for help during a medical emergency where he suffered stroke-like symptoms on August 1st, the day before his birthday. (See this report for further information on this incident.) His words were coming out in slurs because the whole left side of his body was paralyzed, and he was suffering severe cognitive impairment and confusion. Since then, he has gone at least 29 days without a scan, and each day that goes past without adequate medical treatment and attention increases the danger that he could suffer life-changing damage.

Eric is being held under the custody of the BOP while fighting a BOP case. He is being held in a prison in which an adult man threatened their daughter 2 years before, a man who still works at the same prison. A prison where guards currently fuck with him by asking where his daughters go to school over and over. During his stay in BOP custody, staff have attempted to orchestrate white supremacists to attack and intimidate Eric.

Eric was indicted at the end of August for his own assault. He faces up to 20 years in prison for being attacked and beaten by a guard who feels safe dragging prisoners off camera and attacking them. A guard who is notorious in the public defender’s office for doing this and then destroying lives with false charges. Eric’s case is being brought up in the federal court system, a court system that is built to crush as a much more effective machine than any other in our country, where only 2% go to trial because the feds don’t take a case they can’t win, with fewer than 1% going on to win their case. Things are looking grim.

[Eric can only receive items with the following restrictions: white envelopes, white paper, only black ink, no cards, staples, or books, no card-stock, labels, marker, photos or postcards. Eric has previously said he would like to receive “interesting articles, cartoons, memes, riddles, poems, short stories, articles about Manchester United, the IRA, anything”.]

We need folks to donate, hold fundraisers, we need to be prepared.

We need folks to show up at court appearances. We need to show the state we won’t let them bury our friend. They’ve started filing court dates at extremely short notice to try to ensure Eric’s supporters can’t be there. We let them do this to Eric once already. We let the state convict him of attempted arson and give him 10 years in federal prison. Now they are trying to make sure he never walks out those doors, and is buried in the depths of the system.

With love and rage

For much more information on Eric’s case, please listen to this extended audio interview from the Final Straw.

"The impulse to fight against work and management is immediately collective. As we fight against the conditions of our own lives, we see that other people are doing the same. To get anywhere we have to fight side by side. We begin to break down the divisions between us and prejudices, hierarchies, and nationalisms begin to be undermined. As we build trust and solidarity, we grow more daring and combative. More becomes possible. We get more organized, more confident, more disruptive and more powerful."
View all posts by nothingiseverlost →
This entry was posted in Anarchists, Repression and tagged Eric King. Bookmark the permalink.