Posted on September 30, 2019 by nothingiseverlost

For various reasons,  I’ve not found the time to do a proper round-up in a while. This still isn’t as comprehensive as I’d like, but will hopefully do until I can get more into the swing of things.

Solidarity, a film about the experiences of blacklisted workers and those spied on by undercover cops, is having a few showings across the country throughout October and November, as follows:

News from the world of grassroots unions: although there’s no specific dates set, the United Voices of the World are expecting strikes in seven disputes across the capital soon. As ever, donations to their strike fund are very welcome.

Notes from Below report there’s been a mini-strike wave among Deliveroo workers in September, with strikes in Reading, Brentwood, Newcastle, Colchester, Oxford, Nottingham, Bristol, Brixton, Clapham, Balham, Plymouth, Exeter, Bermondsey, Peckham, Camberwell, Brentwood, and Croydon. If you’re in London and would like to know more, the book Riding for Deliveroo has its official launch on Friday 4th, so there’s likely to be plenty of relevant discussion there.

A miscellaneous piece of news I’d missed until now is that the 1 in 12 Club, one of the longest-running autonomous social centres in the UK and a vital piece of the North’s radical infrastructure, is holding a fundraiser to repair the building. I couldn’t actually get that fundraiser link to accept my money, but maybe you’ll have better luck, or perhaps get in touch with them directly to sort something out. There’s a big fundraiser gig happening for it in Leeds in December, for anyone who’s interested.

Other quick upcoming listings: as previously mentioned, this Wednesday sees a solidarity demo with Iranian anarcho-syndicalist prisoner Soheil Arabi, and later on that day the IWGB are holding a protest as part of their dispute at LouLou’s, a posh London club that’s victimised its workers for organising. On Thursday 3rd, support staff at the University of Birmingham are taking their sixth day of strike action. Coming up this weekend, the Anarchist Communist Group are holding their second Libertarian Communism dayschool at Mayday Rooms in London on the 5th. On Friday 11th, also at Mayday Rooms, there’s going to be an info night and fundraiser in solidarity with the Athens squats facing increased attacks from the Greek state, and on the 12th there’s a radical history festival down in Bristol and a big antifascist mobilisation up in Dewsbury. Further ahead, on November 2nd there’s the Nottingham Radical Bookfair. 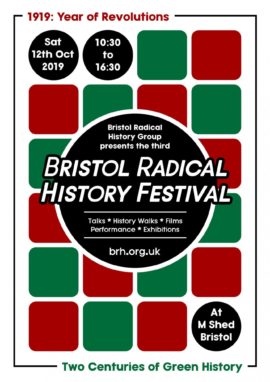 "The impulse to fight against work and management is immediately collective. As we fight against the conditions of our own lives, we see that other people are doing the same. To get anywhere we have to fight side by side. We begin to break down the divisions between us and prejudices, hierarchies, and nationalisms begin to be undermined. As we build trust and solidarity, we grow more daring and combative. More becomes possible. We get more organized, more confident, more disruptive and more powerful."
View all posts by nothingiseverlost →
This entry was posted in Anarchists, Repression, Strikes, Unions, Work and tagged 1 in 12 Club, Anarchist Communist Group, Blacklist Support Group, blacklisting, Bristol Radical History Group, CAIWU, Deliveroo, IWGB, Kirklees Anti-Fascist Assembly, Notes From Below, spycops, United Voices of the World. Bookmark the permalink.