Posted on October 21, 2019 by nothingiseverlost

Updated events listings for the next few weeks:

Prisoners in South Carolina have made a call for international solidarity against the horrific conditions they face, with some prisons having spent around two years in “lockdown” conditions, including the installation of metal plates over windows to block out all natural light, which are leading to a huge spike in the suicide rate. Following in the footsteps of Eddie Cochrane and PJ Harvey, they have specifically asked that their appeal should be brought to the attention of the United Nations. As part of a co-ordinated international action, people in London will be meeting to help deliver and amplify their demands at Vauxhall Gardens at 9am on Wednesday 23rd.

You can learn much more about the situation in South Carolina by listening to this audio interview with a member of Blue Ridge Anarchist Black Cross, which also suggests:

“What you can do:

-On Monday (October 21): Call Head of SCDC Bryan Stirling at 803-896-8555 to tell him about this multi-city, international action. Let Stirling know that his department is now not only a national embarrassment, but an international one as well! [Stirling’s email is stirling.bryan@doc.sc.gov, by the way]

-All week, October 21-28: Follow and spread the hashtag #SunlightIsAHumanRight

-Ongoing: Document what you and your loved ones are experiencing; evidence and testimony will help us prepare a formal complaint”

As I’ve previously mentioned (now updated with slightly more stuff), other things happening this week are:

Bradford library and museum staff will be striking against cuts to the service on Monday 21st and Tuesday 22nd, and there’s support demos at City Library and Shipley Library on the Monday morning, and Keighley Library and Cliffe Castle Museum on the 22nd. Staying with libraries and museums, there’s a demonstration in support of the striking Bromley Library staff at a “new library professionals day” at 9am in central London on the 22nd as well as a second one outside Greenwich Council Cabinet that afternoon, and workers at the Science Museums Group, covering sites in London, Manchester, Bradford, York and Wiltshire, will be striking over pay on Wednesday 23rd. The 23rd is also a “Patients not Passports” day of action, marking two years since healthcare charges for migrants were brought into the NHS, with events confirmed for Bristol, London, Manchester and Birmingham.

Thursday 24th sees UVW-organised strikes over issues including sick pay and the London Living Wage at the University of Greenwich and the Royal Parks, and a “Riding for Deliveroo” talk in Nottingham organised by the IWGB’s Nottingham Riders Network. The Riding for Deliveroo tour comes to Sheffield on Friday 25th, and the blacklisting film Solidarity will be shown in Glasgow that night. And early on Friday morning, people will be heading down to arms factory BAE Filton, just outside of Bristol, as part of the ongoing backlash against Turkey’s war drive.

Saturday 26th is the annual United Families & Friends Campaign march remembering all those who’ve died in police custody, prisons, mental hospitals and detention centers, as well as a separate demo for the Save Latin Village campaign, and further North the Riding for Deliveroo tour comes to Manchester as part of an IWW-hosted discussion about organising, and there’s a demo at Morton Hall detention center. Then on Sunday 27th there’s a “Become Ungovernable” day of skill-sharing for direct action somewhere in North London, an open meeting for people who are interested in getting involved in the campaign against prison expansion somewhere else in London, an antifascist planning meeting in Bristol, and a talk about “state subversion and the North-East” up in Newcastle.

Beyond that, outsourced cleaners, porters and caterers organised through the grassroots UVW union will be striking from October 28st-31st at St Mary’s Hospital to demand equal treatment with directly-employed NHS staff. On Tuesday 29th, there’s a protest at University College London in support of the outsourced staff who are pursuing a similar campaign there through the IWGB. On Wednesday 30th, there’s another demonstration in support of the striking Bromley Library workers outside a meeting of Greenwich council, and the Solidarity film comes to Leicester. On Halloween/Glorious No-Deal Brexit Crash-Out Day/Brexit Betrayal Day Part however many it is now (delete as appropriate), London Anti-Fascist Assembly will be out to oppose whatever the far-right end up doing on the day.

Early November dates: On Saturday 2nd, there’s the Nottingham Radical Bookfair, the RiseUp4Rojava campaign are calling for a “World Resistance Day” so there’ll probably be a whole lot of Rojava solidarity stuff going on, and there’s an “innovations in organising” conference in London discussing how “to find effective ways to rebuild working class power”.

On the 4th, the blacklisting film Solidarity has its second London showing, and its North London premiere. Nottingham College staff will be striking against an attempt to impose new contracts from the 5th-7th, and Bradford library and museum staff will also be out on the same dates as part of their ongoing fight against cuts to those services.

On November 6, Brighton folk will be heading down to their local arms factory, EDO MBM, to continue the struggle against the companies profiting off war and destruction worldwide. On the 7th, the Solidarity film reaches Newcastle. St Mary’s staff are out again from the 11th-13th, Nottingham College are striking throughout the 11th-14th, and on the 12th, cleaners at Highgate Wood School who’ve organised through grassroots union CAIWU are striking to demand a living wage, sick pay, not to have to pay for their own equipment, and similar demands. On Saturday 16th, there’s a big conference on undercover policing, blacklisting and the trade unions, jointly hosted by the Campaign Opposing Police Surveillance, Police Spies Out Of Lives and the Blacklist Support Group, or for anyone around South Essex there’s a protest against local NHS cuts.

Bradford libraries and museums, Nottingham College, and St Mary’s Hospital all have various other strike dates running throughout the rest of the month and into December. Also in December, Liverpool Uni campus support staff are striking on the 2nd and 3rd against attacks on their terms and conditions that amount to a pay cut, and the Manchester & Salford Anarchist Bookfair will be happening at the People’s History Museum on December 7th. 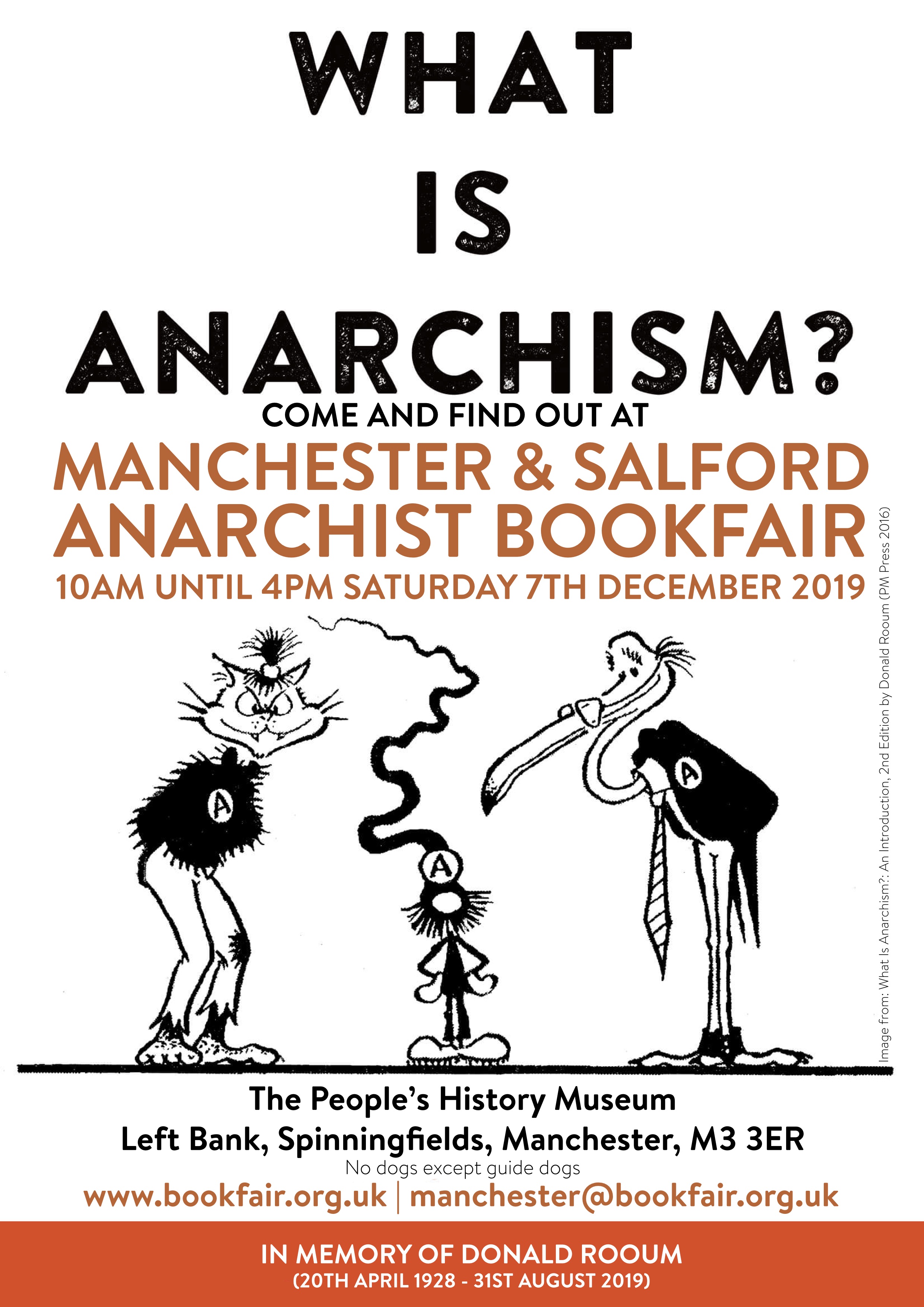 "The impulse to fight against work and management is immediately collective. As we fight against the conditions of our own lives, we see that other people are doing the same. To get anywhere we have to fight side by side. We begin to break down the divisions between us and prejudices, hierarchies, and nationalisms begin to be undermined. As we build trust and solidarity, we grow more daring and combative. More becomes possible. We get more organized, more confident, more disruptive and more powerful."
View all posts by nothingiseverlost →
This entry was posted in Anarchists, Repression, Strikes, Unions, Work and tagged arms trade, blacklisting, Bromley libraries, CAIWU, Deliveroo, IWGB, prisoner solidarity, South Carolina, UCL, Unite, United Voices of the World. Bookmark the permalink.