Posted on December 28, 2019 by nothingiseverlost

From the Incarcerated Workers Organising Committee: 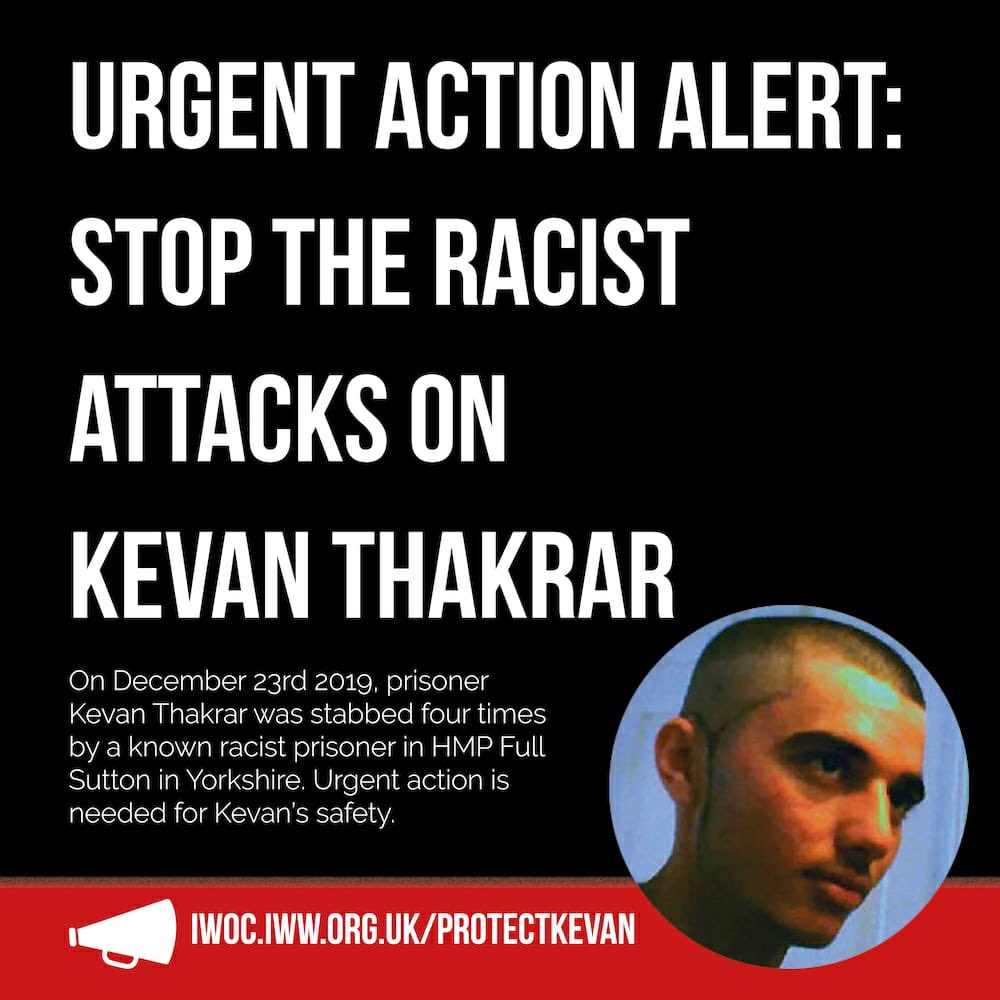 This evening [December 23rd] prisoner Kevan Thakrar called to inform IWOC that a known racist attempted to take his life this afternoon. Kevin McCarthy stabbed Kevan more than four times while Kevan was at the food servery. He used a wooden shank and shouted “die, die, die!” whilst stabbing Kevan. Kevan has four puncture wounds on his back and bruises and scratches after also being hit on the head. Kevin walked past two prison officers neither of whom intervened to prevent or stop the attack until Kevan turned round to defend himself. Even then, no officers put their hands on Kevin or restrained him. No alarms were pressed/no shouting for help. Kevin McCarthy actually walked back into his own cell and locked himself in. The prison failed to take him to hospital but he was treated by two nurses on the wing.

This is the second attack Kevan has experienced in HMP Full Sutton in recent months. Kevan’s solicitor had raised a complaint about Kevin McCarthy prior to Kevan being moved onto the CSC because Kevin has perpetrated racist attacks against other prisoners before. Kevan is shaken and in need of support to demand the prison move him to a safer location and take action to stop further racist attacks on his life. Feel free to use your own words as well as the sample scripts below.

Hello, I am calling on behalf of Kevan Thakrar who is currently in the CSC at HMP Full Sutton. Kevan was stabbed four times yesterday by a known racist prisoner. Two prison officers were present and did not act to prevent or stop the attack until Kevan turned around to protect himself. This is the second attack Kevan has experienced in HMP Full Sutton in recent months and yet he is still held in the CSC.

I am really concerned about Kevan’s safety in the CSC and I am calling to demand that he is moved out of the CSC and to a safer location immediately.

I am writing as a concerned community member on hearing of a physical attack against Kevan Thakrar (A4907AE) that occurred yesterday, 23rd December at the Close Supervision Centre, HMP Full Sutton.

As I understand it, two prison officers were present and did not act to prevent or stop the attack until Kevan turned around to protect himself, the officers did not restrain the person attacking Kevan and no alarms were raised.

This is the second attack Kevan has experienced in HMP Full Sutton in recent months. Kevan has made complaints about threats of violence from known racist prisoners but no action has been taken. The person who stabbed Kevan is known to have racist views, and shouted ‘die, die die’ while stabbing Kevan. Kevan’s solicitor had raised a complaint about the person who stabbed Kevan before Kevan was moved onto the unit, as this person has made racist attacks on others.

In addition I believe that Kevan has not been seen by a Doctor and the person who stabbed Kevan remains on the same unit as him.

I am extremely concerned about Kevan’s safety and wellbeing in the CSC. Kevan has PTSD and these acts of violence add further traumas and I imagine he must be fearful for his life.

The environment created in the Close Supervision Centre makes it more likely for these acts of extreme violence to occur, and Kevan is at risk of further attacks there.

As per the Adult Safeguarding in Prison policy (National Offender Management Service 2016) Point 1.5 states that ‘All adult prisoners are protected from abuse and neglect, and prisons effectively discharge their duty of care towards them. Reported incidents of abuse and neglect are managed appropriately’.

I am urging you to move Kevan out of the CSC and to a safer location immediately in order that HMP Full Sutton adhere to their policy obligations.

Write to Governor Gareth Sands at HMP Full Sutton (gareth.sands@hmps.gsi.gov.uk) or phone the prison on 01759 475100.

Email the Executive Director for High Security & Long Term Estate for HM Prison and Probation Service, Richard Vince demanding Kevan be moved from the CSC to a safer location: Richard.Vince02@hmps.gsi.gov.uk

Keep Kevan updated with all your actions by email through emailaprisoner.com or letter to:

"The impulse to fight against work and management is immediately collective. As we fight against the conditions of our own lives, we see that other people are doing the same. To get anywhere we have to fight side by side. We begin to break down the divisions between us and prejudices, hierarchies, and nationalisms begin to be undermined. As we build trust and solidarity, we grow more daring and combative. More becomes possible. We get more organized, more confident, more disruptive and more powerful."
View all posts by nothingiseverlost →
This entry was posted in Racism, Repression and tagged Incarcerated Workers Organizing Committee, Kevan Thakrar, prisoner solidarity. Bookmark the permalink.