Update on Ramsey Orta: time to get him free!

Posted on April 14, 2020 by nothingiseverlost

Ramsey Orta’s support team have posted a pair of updates, indicating that his immediate demands have been granted, but that getting him home is more urgent than ever, as the COVID-19 infection has begun spreading in the prison where he’s held. If you’d like to learn more about Orta’s situation, you can listen to this new interview with the Final Straw Radio Show, which discusses his case in depth.

Ramsey is eligible for release today for the following reasons! These are our Demands!
1. Ramsey pled out to non-violent charges in 2016:
We demand that Ramsey is released because he is not a threat to society!
2. Ramsey is scheduled to be released in July of 2020:
We demand that Ramsey is released now because July is right upon us, but under the circumstances, is years away!
3. Ramsey is currently in danger of being exposed to Covid-19:
We demand that Ramsey be released because his prison sentence is not a death sentence!
4. Ramsey has been systematically abused throughout his incarceration.
We demand that Ramsey is released because the abuse he is experiencing grows by the day!
If you agree with out demands above, we ask that you copy and past them and contact the varies emails and numbers below. We also ask that you demand that all inmates receive showers, soap, adequate food immediately, and that ALL prisoners with similar conditions and experiences are released.
When you mention Ramey Orta in your emails and calls to prison entities, be sure to include his prison ID number. Example: RAMSEY ORTA 16A4200
Governor Andrew Cuomo
Email: https://www.governor.ny.gov/content/governor-contact-form / Phone: 1-518-474-8390
Anthony J. Annucci: Acting Commissioner for New York State Prisons
Email: Commissioner@doccs.ny.gov / Phone: (518) 457-8134
Acting Executive Deputy Commissioner – Daniel F. Martuscello, lll
Phone: (518) 457-8126
If you agree with our demands, share them everywhere!
Share on your social media! Contact and email other entities, groups, and people you believe need to hear this! 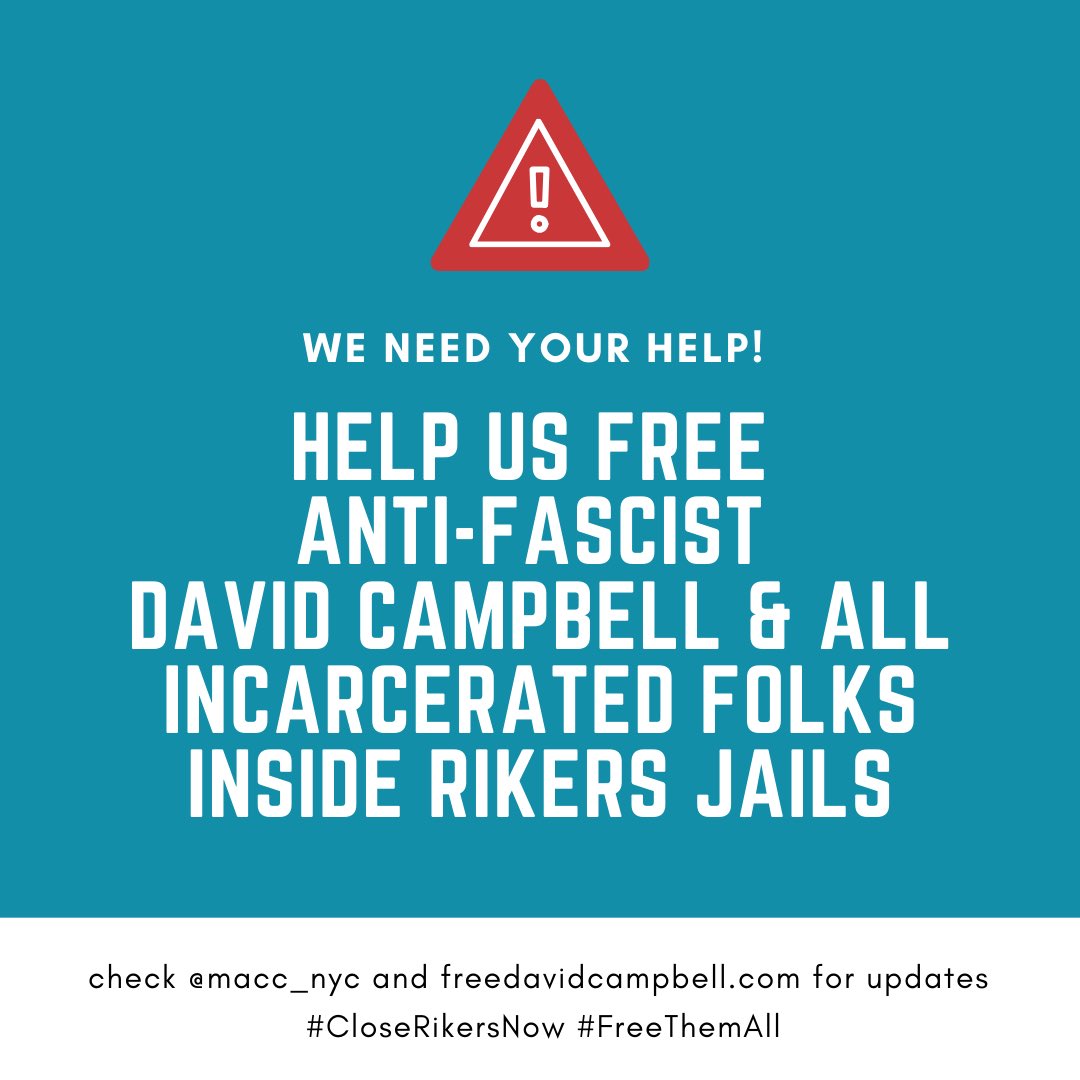 Meanwhile, antifascist prisoner David Campbell, also held in the New York system, also needs to be released to avoid infection, and his friends are asking that people contact the following people asking for his release:

Sample Script for Phone and Email:

I am [calling/emailing] to draw your attention to the case of David Campbell, who is currently incarcerated on Rikers Island, has been authorized to be released by DA Vance’s office in multiple statements to journalists, but inexplicably remains detained. I implore you to use the unique powers of your office to see that he is released as soon as possible. Not only has he been a model inmate and a beloved fixture of the NYC activist community, but he is also an experienced funeral director who has served low income communities in Brooklyn for years. This skillset is unfortunately in critically high demand during this pandemic, and his former colleagues have called for his release ASAP.

As the pandemic spreads, incarcerated folks are testing positive at a horrifying rate. Detained folks and CO’s have already died. Please do the right thing. Follow the DA’s guidance in releasing David Campbell, and heed the numerous public calls to release all those detained in DOC custody immediately. This is not only the most ethical course of action, but it is also the most rational: each day folks remain in DOC custody, the worse this pandemic becomes for everyone in New York.

It might also be worth contacting those people about Ramsey’s case, and perhaps also about the elderly New York political prisoners Jalil Muntaqim/Anthony Bottom and David Gilbert, who would both be in serious danger from the outbreak continuing to spread.

"The impulse to fight against work and management is immediately collective. As we fight against the conditions of our own lives, we see that other people are doing the same. To get anywhere we have to fight side by side. We begin to break down the divisions between us and prejudices, hierarchies, and nationalisms begin to be undermined. As we build trust and solidarity, we grow more daring and combative. More becomes possible. We get more organized, more confident, more disruptive and more powerful."
View all posts by nothingiseverlost →
This entry was posted in Repression and tagged David Campbell, prisoner solidarity, Ramsey Orta. Bookmark the permalink.

1 Response to Update on Ramsey Orta: time to get him free!