The Croydon Pizza Hut struggle continues, and other updates

Posted on April 24, 2020 by nothingiseverlost

From the Croydon Solidarity Network:

In support of Pizza Hut workers, Croydon Solidarity Network calls for those able to, to gather outside Lewisham Pizza or Wandsworth Pizza Hut on Saturday, 25th April at 5.30pm.
Pizza Hut workers across several stores owned by the ATEAM franchise have not had their wages paid in full for several weeks now. On 22nd April, 25 people workers and supporters gathered, 2 metres apart, at Pizza Hut Penge, an amazing show of solidarity in these uncertain times.
Despite numerous emails, phone calls and social media posts in the week leading up to the action, only a small number of them have been paid in full. Some workers have only received part of their pay and others have yet to be paid any of the money owed, and neither the franchise owner nor Pizza Hut have furloughed anyone.
Croydon Solidarity Network and ATEAM employees are inviting everyone who is healthy and feels able to join another exercise session on 25th April, Saturday at 5.30pm, at Lewisham (199, 201 Lewisham Way, SE4 1UY) or Wandsworth (174 Garratt Ln, SW18 4ED) Pizza Hut stores. These actions will run simultaneously to bring attention to this injustice.
For those who would like to show support from home, Pizza Hut can be reached at @pizzahutuk and @pizzahutdeliver on Twitter (use the #PizzaHutPayUp hashtag), or on their Facebook page.

And invite your friends!!

As previously mentioned, there’s a push to use Workers’ Memorial Day on Tuesday 28th to highlight the ongoing avoidable deaths being caused by forcing workers to work through the pandemic. The Newcastle bookfair that was planned to honour the memory of Ewan Brown will not be going ahead any time soon, but in the meantime the organisers are asking for people to commemorate his spirit by raising banners inside or outside their homes on April 30th, the anniversary of his death.

I’d missed seeing this in advance, but the Alliance of Middle Eastern and North African Socialists have done some good work highlighting how the pandemic shows the need for a truly internationalist prison abolition movement, and as part of that they organised an online discussion about the prisoner/migrant camp population in the US, Syria and Iran, which you can view here. It might be worth keeping an eye on their website for similar upcoming events if that sounds like something you’d be interested in.

The Anarchist Communist Group have been doing a good job of consistently putting out coverage of the ongoing strikes and struggles that have broken out internationally in response to this crisis, and they’ve also just brought out a new range of stickers. Obviously none of us are spending that much time outdoors nowadays, but if you feel like making your daily exercise/walk to the shops and back/walk to Penge Pizza Hut a little bit more lively, you can contact them at info@anarchistcommunism.org to get a bundle. 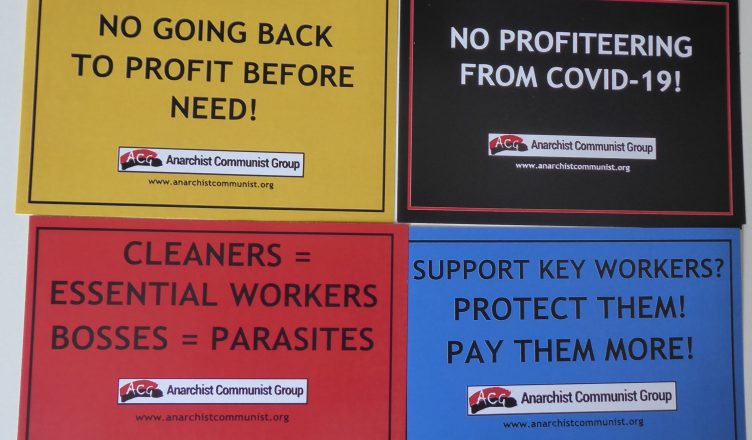 "The impulse to fight against work and management is immediately collective. As we fight against the conditions of our own lives, we see that other people are doing the same. To get anywhere we have to fight side by side. We begin to break down the divisions between us and prejudices, hierarchies, and nationalisms begin to be undermined. As we build trust and solidarity, we grow more daring and combative. More becomes possible. We get more organized, more confident, more disruptive and more powerful."
View all posts by nothingiseverlost →
This entry was posted in Anarchists, Internationalism, Work and tagged Alliance of Middle Eastern and North African Socialists, Anarchist Communist Group, Croydon Solidarity Network, International Workers' Memorial Day, wage theft. Bookmark the permalink.

1 Response to The Croydon Pizza Hut struggle continues, and other updates