Posted on June 14, 2020 by nothingiseverlost 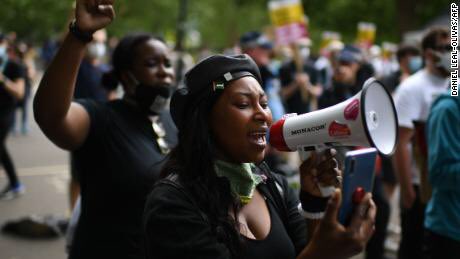 Yesterday was an eventful day. For the sake of posterity, here’s a lightly-edited version of the report posted on twitter by the Malcolm X Movement:*

“History was made today in Ldn: Militant independent black working class youth-led history, in the face of an formidable array of forces railed against them from the govt, to the fascist,from left/BLMUK to wellknown celebrities.
This is an account from the direct experiences of MXM members today, and also our close unified approach with London Black Revs and several other radical black formations.
The background today is nearly 10 years of a general absence of radical grassroots resistance, the last time was August 2011 when we rose up for 3 days after the police murder of Mark Duggan Broadwater Farm crew.
The racist police killing sparked the uprising for 3 days but we didn’t build strategically and instead we suffered further with some 5,000 sent to prison with no political defence campaigns.
Our political voice continued to dampen, to perhaps the worst position is has for generations: all the while we suffered Brexit racist upsurges, Grenfell, Windrush & now tens of thousands needlessly dead from Covid.
The only other time that the militant independent Black-led youth came out in serious numbers and strategy was the Dec 2016 mass protests against nato imposed racist violence & human trafficking in Libya. We were in the centre of those protests.
The Minneapolis Uprising that sparked a Black Revolution for a week following the terrible lynching of George Floyd, our black-led mass militant resistance against the armed forces of the usa state snapped us out of our decades long slumber. The historic turn has happened.
Something has fundamentally changed in our ends/communities. We are walking around council estates and speaking to our peoples, nearly everyone is brimming with pride & the youth want to become revolutionaries. Hardly exaggerating!
NO ONE but the militant black-led working class youth are leading this new era Black Revolution bold and assertive initiatives. This is all independent of the: White left, BLM, the state, the govt, media: pure grassroots!
So for three days in the lead up and until and all thru today there has been an indirect alliance of a massive array of forces against black-led militant youth standing up to the historic threats against the farright triggered by trashing their shitty colonial monuments.
The Tory fascist state threatened to throw us in jail within 24hrs of a protest, BLM, the left, the far right ALL told us to sell out, to give up, to not mobilise and defend ourselves and families against far right anti black provocation. Ha! We fucking showed all those cunts.
So today!! There was disarray as to where we march from and to. It was vaguely understood that we amass at Hyde Park & march along police defined route to Parliament Square, the group that marched from Hyde Park to Parliament Square was around 100. This was at appprox 1pm.
By 1pm fascists had basically taken Trafalgar Square, where our protest was supposed to stand. At approx 2:15pm the 100 on our side marching there is a bit more perhaps 200 and they walk into a Square full of thousands of fascists and riot police. Our side spend nearly 2 hours resisting!
These 100-200 on our side spending nearly 2 hours standing up to and fighting back fascists in Trafalgar Square are now LEGEND. We never use that word lightly. It was hard those trying to get in but blocked by the pigs. But they are today’s core heroes.
For two hours some of our members connected with a lot of crews outside of Trafalgar Square police cordon. They were all finally let in and it was an amazing feeling to be united wiith our resistance comrades. See vid here. Remember: through all this sellouts are demanding people go home! Fuck them. Fuck them.
The police curfew was at 5pm, they opened their cordon and we marched down triumphantly down the strand. Still more comrades are joining us. There’s another chapter of Black Power resistance next!…
We then cross Waterloo Bridge, but there’s more fascists on the other side by Waterloo station. More EDL type fascists get mash up in trying to aggress us. It’s an intense complex messy battles in self defence against fascists & riot police.
It’s at this point riot police move in and make considerable arrests from amongst our comrades. We are busy liaising with other comrades to assist the arrested etc. We must ensure max support to all charged & mobilise in support, love and solidarity.
Crews united, beefs crushed for Black Liberation, fascists were confronted boldly despite screaming calls to sell out all around and fascist terror; new unities made between comrades from across our council estates. Who said dreams can’t come true??!
BIG respect to grassroots who came out today; ya’ll realise how historic today was?
✊🏽 to hard rolling comrades for today, not gonna mention names for obvious reasons. Massive respect to London Black Revs who with us defied all the sell outs & racist terror & helped lead up until today!”

*note: I hadn’t really encountered them before and don’t know much about them, so it’s possible that there might be all sorts of things I’d disagree with them on; still, their courage yesterday was undeniably impressive.

"The impulse to fight against work and management is immediately collective. As we fight against the conditions of our own lives, we see that other people are doing the same. To get anywhere we have to fight side by side. We begin to break down the divisions between us and prejudices, hierarchies, and nationalisms begin to be undermined. As we build trust and solidarity, we grow more daring and combative. More becomes possible. We get more organized, more confident, more disruptive and more powerful."
View all posts by nothingiseverlost →
This entry was posted in Racism, The right and tagged anti-fascism, Black Lives Matter, Malcolm X Movement. Bookmark the permalink.

1 Response to Saturday June 13: A report from Trafalgar Square