Posted on July 5, 2017 by nothingiseverlost

Another quick round-up of ongoing workplace and legal/repression stuff:

The Woolwich Ferry dispute, which has been running since last winter, has been resolved in what the unions are describing as a victory, with the two managers at the heart of the dispute having been removed. The dispute at the University of London, which has seen security guards striking over pay and contracts, looks set to escalate, as postroom staff and porters have both voted to join in.

Cleaners, porters and security staff employed through Serco at four London hospitals run by Barts Health NHS Trust are currently taking strike action over their low pay. They’re in the middle of a 3-day strike which started on Tuesday 4th, with more walkouts planned to run throughout the month. On Friday the 7th, the London Hazards group will be commemorating all those who’ve contracted mesothelioma through working with asbestos, starting at 10:00 outside Guy’s Hospital. The 7th will also see the next round of action in the dispute over low pay and union-busting at Picturehouse Cinemas, with staff at the Ritzy, East Dulwich, Hackney, Central and Crouch End cinemas all walking out. I’m sure support will be welcome at any of the picket lines, but it sounds like the big push is to get people up to Crouch End. Or, if you’re closer to that end of town, Lewisham Momentum folk will be leafleting Greenwich Picturehouse to try and spread the dispute there.

Saturday 8th will see the start of two weeks of strike action by housing maintenance workers who’re employed by Mears and Manchester Working to carry out repairs at  Northwards Housing in Manchester, over both pay and attacks on their terms and conditions. If you can get up to Durham on the day, that date also sees the traditional miners’ gala, and a chance to stand alongside the heroic Durham teaching assistants. 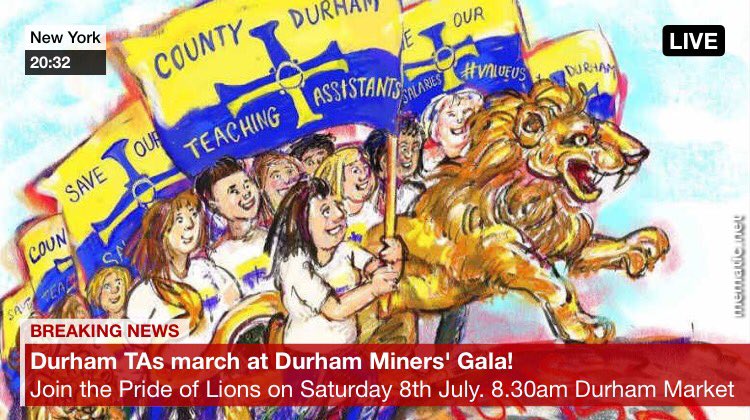 At the London School of Economics, cleaners who’ve organised through the UVW union will be striking from the 12th-15th to demand the reinstatement of the sacked supervisor Alba, the last outstanding grievance from their long-running dispute.

There’s also a lot of stuff going on in prison/repression/legal system-type news. The Smash IPP campaign against indefinite sentences will be running events all month – a protest for IPP prisoners held at HMP Risley in Warrington on Saturday 8th, a letter-writing event in Bristol on Sunday 9th, a presence at Norwich probation office on Thursday 13th, a demo at Bristol probation office on Friday 14th, a noise demo at HMP Erlsetoke (somewhere in the south-west) on Sunday 16th, a return to Norwich probation office on the 19th, a letter-writing event in Norwich on the 20th, and then a noise demo at HMP Peterborough on the 23rd, commemorating the anniversary of an IPP prisoner who killed herself there.

Meanwhile, CrimethInc are asking for an international week of solidarity with the defendants facing charges from Trump’s inauguration from the 20th-27th July. They have a range of suggestions for what people can do, including the very practical suggestion that people hassle the DC city council, who have agreed to investigate the police’s conduct on the day, but there’s no word yet as to whether or not they’ll run the investigation in time to turn up evidence that could be useful for the defendants in court. July also sees at least two birthdays of imprisoned comrades in the US: on July 17th, Dakota Moss, who’s serving a 14-year sentence for ram-raiding a gun store during the Ferguson uprising, will turn 22, and on the 19th, Keith “Malik” Washington, a revolutionary prisoner, organiser, and prolific writer, will turn 49. And as a quick reminder, another Ferguson prisoner, Steve Martin (probably not the same one who was in Man with Two Brains), recently received his sentence, if you want to send him a quick note of encouragement.

"The impulse to fight against work and management is immediately collective. As we fight against the conditions of our own lives, we see that other people are doing the same. To get anywhere we have to fight side by side. We begin to break down the divisions between us and prejudices, hierarchies, and nationalisms begin to be undermined. As we build trust and solidarity, we grow more daring and combative. More becomes possible. We get more organized, more confident, more disruptive and more powerful."
View all posts by nothingiseverlost →
This entry was posted in Protests, Repression, Strikes, Unions, Work and tagged Barts Health, Bulgarian Prisoners' Association, County Durham teaching assistants, Crimethinc, Ferguson, IWGB, J20, Jock Palfreeman, LSE, Picturehouse Living Wage, Smash IPP, United Voices of the World, University of London. Bookmark the permalink.