Posted on November 5, 2017 by nothingiseverlost

Over the last few years, anarchists in the Czech Republic have found themselves targeted by a crackdown called “Operation Fenix”, which, in classic state fashion, claims its justification as a result of plots which were started by undercover police officers. This autumn, the case finally came to trial, and was dismissed for lack of evidence, although the prosecution is appealing and there is also due to be another trial arising out of the same operation. Those involved have written about their experiences here, in a document which is also available as a PDF:

“This long court hearing was about five anarchists, three of them accused of plotting a terrorist attack on a train carrying military paraphernalia. Two of them were accused of knowing about such plans and not having stopped the presumed authors. Two of these five people were also accused of preparing an attack with Molotov cocktails on police cars during the eviction of the Cibulka squat. Basically, according to the deployed police agents, there are in total five people and three different crimes involved. (And all this is just for Fenix 1, because some of these people are facing further accusations in the context of Fenix 2).

In the group where the five accused were involved, there were two police agent
infiltrators. These two individuals actively prepared both attacks and they also
partly started them up. However, the judge did not identify their actions as a provocation just because the materials that would detect the provocation are not available.

The Judge, Her Hon. Hana Hrncirova, stressed that she acquitted all the defendants precisely because of lack of sufficient evidence. She highlighted the lack of transparency of police’s work: “The reason why the court took such decision is the fact that during the evidence assessment the judge expressed strong doubts over the police transparency in their methods both before the commencement of the criminal prosecution and when it was legally permitted to involve the deployed agents in the case,” she said…

Comic was the moment, when the judge raised this stack over her head (it is a volume of about 400 A4 pages) and said that from all these transcripts not a single thing has any value as evidence.

The decision is not final because the state prosecutor Pazourek felt that he still has not destroyed people’s life enough and appealed on site. As a former police officer, he believes that the police has acted correctly and hopes that the higher Court of Appeal will confirm his opinion. Surely, he will do his utmost best to find something that “must be there and can be used”. We can then just hope that this hunter of anarchists (who is also the one who proposed at least 12 years in jail for charged ones in Fenix) and also plays role in Fenix 2 will have elements with no value of evidence in the next trial as well…

For many of us the Court’s verdict is a relief. For a moment we can breathe, meet up for dinner, and see our friends in a more relaxed state of mind outside the prison walls. These moments are important in life and it is good that we can enjoy them. Prison is a useless institution, it divides relationships, isolates people and destroys lives. This is why the verdict, no matter how much more pleasant than “guilty”, is not a total win for us. We do not forget what three years of infiltration and later investigation meant. Ales, Martin, and Peter have all been incarcerated for 27 months in total, Lukas – 7 months, and before that he had been one year underground. All of them with still awaiting trials (appeal of Fenix 1 and for some of them and two more comrades Fenix 2) Some of them with possible life sentences still in the air. Let’s not forget about Igor, who is today found innocent, was in the hardest custody for three months, is still facing hard restrictions and had been reporting to the probation services for almost year and a half. On top of that, he is still at risk of deportation from the Czech Republic due by his stay in custody.

The families, friends and closest people of the defendants and imprisoned, as well as those who are directly affected by the Fenix case, are facing a great deal of emotional pressure and separation. The Police broke in in several flats and has been taking more and more people for interrogations. The police is using practices in their powers such as taking people to the forest, threatening the partners and the parents of the suspects. A list of what has been done during the various repressive actions (and we are only talking about the last three years on the anti-authoritarian scene in so called Czech Republic) would probably be long and scary.

In short, it is clear that there is nothing to celebrate. The need to smash the oppressive system is still in the game, just there is need to think about a better strategy and find new ways how to fight. In cases like the Fenix, it is necessary to understand what this is really about. From the very beginning, we said that the police is not primarily after long imprisonments of single anarchists. The Repressive units are not afraid of us alone, nor they dont’t fear of Martin, Peter, Sasha, Ales, Katarína, Radka, Igor, Lukas, Ales and the other defendants. What scares them is that more and more people would come out by identifying with our ideas, especially if they start using a wider variety of tactics. The protectors of the status quo invest a lot of strengths, energy and resources to keep people in the belief that this is the freedom they dream for.

Anti-authoritarian and anarchists people that believe that we can live our lives in a more genuine way than the one offered by neo-liberalism and that we do not need State and Politics, can offer an alternative which could interfere with this consumerist life-style. Repression is then seen as the ideal tool to suppress ideas. And by them the state apparatus wants to discredit us through sensationalist media and labeling us as terrorists, to intimidate us by using imprisonment and to divide the movement between “the radicals” and the “the nonviolent ones” and place us against each other. Paralyze us with paranoia.

The question is where this attempt of repression is successful and in which points we can work on ourselves. How not to fall into traps that are invisible at first sight and how to tear down walls in our heads. The walls inside ourselves and between us and other people. How to break these walls and build bridges out of them. How to overcome fear, obtain what are fighting for and respect each other. And last but not least, how not to fall in the urge of winning in a game that is not ours and which only takes us away from important things and activities.

The Fenix case has become a crucial point in the lives of many of us. We can learn a lot from it. Take it as a point of reference to better understand how the power structures work and to understand each others as well as to critically analyze our own mistakes. We do not want to pretend that we have the answers to all the questions out there. But we have learned one thing. If we want our actions and our organizing to be really effective and dangerous for the structures of oppression that keep us under control, these must come from collective discussions and negotiations that go beyond the outlines given by the state. We learned that there is no point to hide from repression, it is better to be ready to face it and create conditions that will make such operations inactive. As long as people are put in jail first and it is discussed whether this is the right measure to implement or not only after the imprisonment, there is a reason to keep on fighting. That is not to say that if the legal proceedings happen in the opposite order the issue is solved, rather that we need to imagine an entirely different world. A world without prisons, borders and police where we must really solve the problems ourselves rather then hidding them behind the walls.

Fenix is not an operation targeting a few naive anarchists, but an attack to the future of subversion as a whole. It is also a demonstration of Police power and of the work of the secret state agents in democracy we hear as synonymous to freedom so often.

Do not get caught!

“My pillar values are: Life, Justice, Freedom, and Equality. People who construct cases and want to imprison people hardly understand such values. I am ready for any verdict, and I will take it holding my head high. A verdict that will affect my life and the life of others.”
End of Martin Ignacak’s Final Speech.” 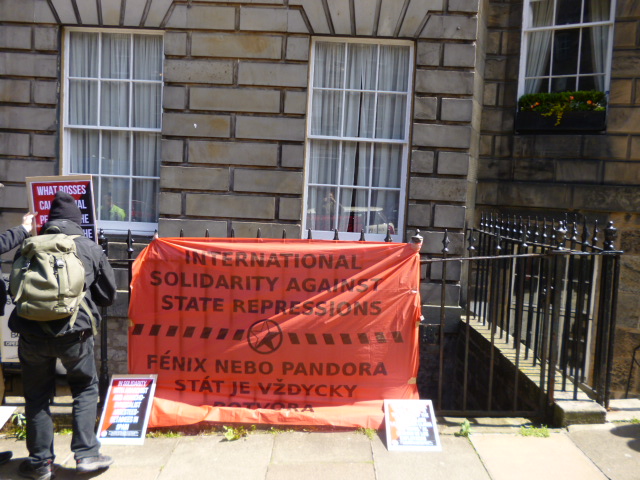 "The impulse to fight against work and management is immediately collective. As we fight against the conditions of our own lives, we see that other people are doing the same. To get anywhere we have to fight side by side. We begin to break down the divisions between us and prejudices, hierarchies, and nationalisms begin to be undermined. As we build trust and solidarity, we grow more daring and combative. More becomes possible. We get more organized, more confident, more disruptive and more powerful."
View all posts by nothingiseverlost →
This entry was posted in Anarchists, Repression and tagged #antifenix, Operation Fenix. Bookmark the permalink.